How can I use a unit vector notation found in physic texts?

In physics (I'm thinking of Taylor's Classical Mechanics or Griffith's Classical Electrodynamics) it is common to use "hat" vectors to denote unit vectors like $\hat{x}$ or $\hat{r}$. If I wanted to write in Mathematica (and still be able to use all the vector analysis functionality) using this notation I could evaluate

and then just let it sit in the background while I type equations in "unit vector" notation and Mathematica doesn't have any trouble. And if I wanted to make something more complicated, like with coordinate systems whose unit vectors change with position (such as polar) I could do this

And type in equations and Mathematica will reduce them down to the standard list form it uses for vectors.

Just to be clear, if you wanted to do this you would also need to write simple substitutions for $r$ and $\theta$ in terms of x and y (because you would likely be using those variables if you were using $\hat{r}$ and $\hat{\theta}$ otherwise the built vector analysis functions wouldn't work as expected). One could even write a function that would take a list like $\{x,y\}$ and write it in terms of such unit vectors, either as $x \hat{x} + y \hat{y}$ or as $r \hat{r}$.

But doing all this in a document would be an awful lot of effort for every computation in say polar coordinates: Write in the nice hat notation, convert to a list, compute say the vector Laplacian (or some other vector related operation), get the output as a list and convert it back to unit vector notation (knowing which coordinate system the output is in).

The thing that is tricky is that Mathematica uses lists to represent vectors, but lists themselves have no notion of coordinate system. If I evaluate $\{r,0,0\}$ for $r=5, \theta=\Pi/2$ I get a very different vector than $\{x,y\}$ with $x->5, y->0$ even though Mathematica sees them both as $\{5,0\}$. To use the vector analysis functions you pretty much need to keep track yourself what expression should be interpreted as being "in" what coordinate system and apply options accordingly.

I guess what I'm asking is, is this possible? What would be the general best approach? Am I way over complicating this?

I should point out that I have scored the Internet looking for packages that do this already and haven't been able to find any. None of the tensor calculus packages accomplish this (and are probably overkill anyway). VECT and Symbolic Computing looked at first to be promising but no cigar (as far as I can tell). And most other implementation of these sorts of things tend to be for coordinate free vectors which is clearly not what I'm going for :)

Sorry for the long question, I just wanted to remove any confusion as to what I'm kinda going for here. Any feedback is appreciated, even if it is just a little :)

If you want just work in one coordinate system, then you can do something like this: 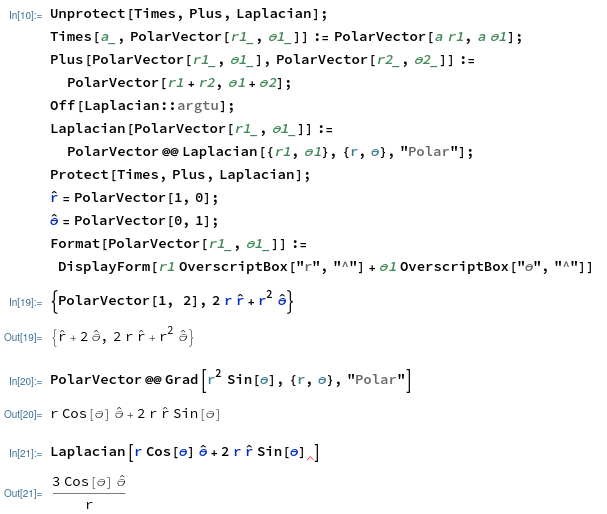 If you want to use multiple coordinate charts, then it really depends on what how you want things to behave. But maybe you can find inspiration from this code: 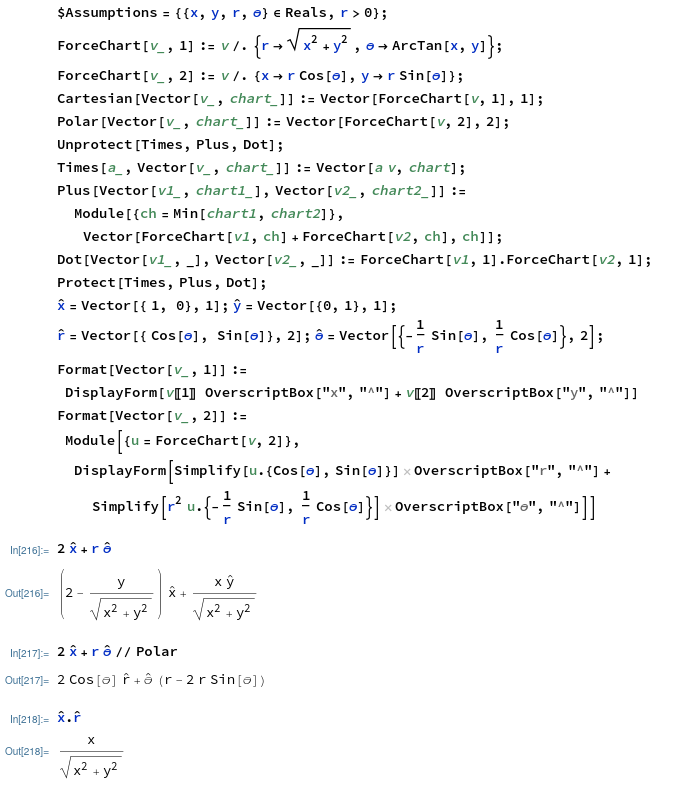 Not the answer you're looking for? Browse other questions tagged symbolic output-formatting vector vector-calculus or ask your own question.

13
How to declare a 3D vector variable?
2
How to input a 3-vector in spherical coordinates?
9
How to define an orthogonal basis in the right way?
17
How can I define or use a new coordinate system?
0
Zero division in linear equation solution
2
Does Mathematica 11 have spherical coordinate unit vectors?
0
Plotting Vector Fields for the Basis Vectors of Different Coordinate Systems
1
how to define unit vectors in mathematica