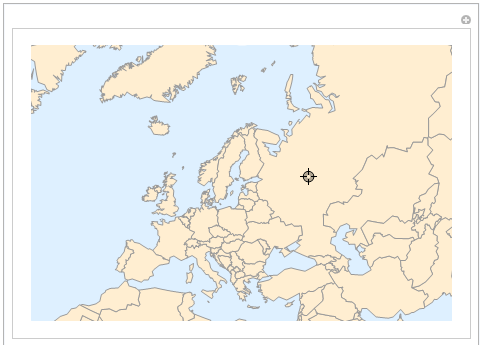 Currently I can use the locator to navigate aimlessly around the map. My goal would be to select the country the mouse clicks on, where I am able to process which country has be selected and it is highlighted. It is unnecessary to have a locator, it was the only method I know.

I am aware this is an extensive question and am happy for any advice.

Here is an approach using DynamicModule, together with EventHandler wrappers around the individual Polygon directives. It also incorporates a lot of front-end trickery to get a user control that runs entirely in the front-end (avoiding front-end ↔ kernel communication improves the performance significantly, especially for cases like this where a many complex graphics primitives are used)

The control is written to support use as a custom control type for Manipulate:

You can also pass in options to be added to the GeoGraphics command, e.g. if you want to change the size or the GeoBackground.

Some notes on the implementation:

Not the answer you're looking for? Browse other questions tagged dynamic curated-data geography or ask your own question.

15
VoronoiMesh as a TogglerBar
14
ScheduledTask with scoped variables. Working with timed evaluation
4
Cloud Deploy dynamic country selection from a map

4
Maintaining map dimensions after using Colorize
2
How to dynamically update a variable by using mouse over?
11
How to combine more locations (GPS coordinates inside one city) with Google map?
5
How to correctly project heat map onto map
5
How draw a line dynamically using manipulate?
8
How do I plot my country map with weather data stations?
17
How to ContourPlot a function of the coordinates on the Earth's surface on a map projection
6
How can I get the country name when I put the mouse on the map?