Different result from utilizing of eigenvalues and eigenvectors commands

I have a matrix as a function of a parameter like

If I plot its eigenvalues using the following code

I get the right results as 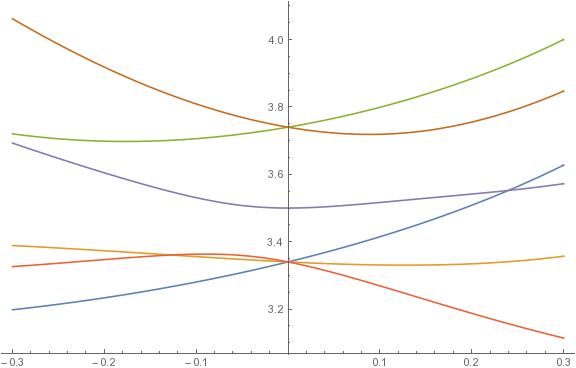 But I'd like to plot the eigenvalues using another method, constructing the appropriate transformation that afterward, I have the eigenvalues at the diagonal elements of the matrix. If I use the eigenvectors command, I will find such a matrix in which each row is an eigenvector. Then I try to extract data using the following code

but the final results are different and wrong: 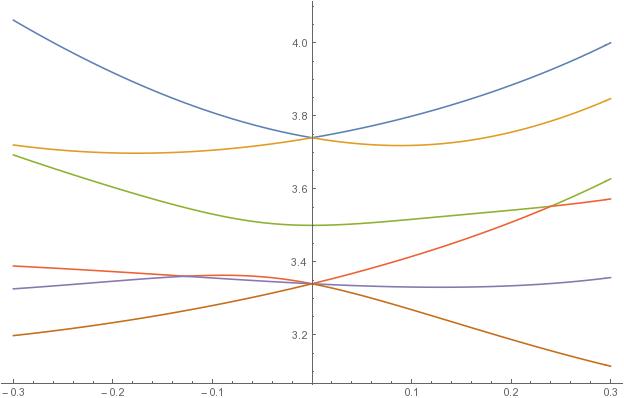 One can see that after each crossing of the lines, the color of lines changes in a wring way. How can I use the second method in the right way?

As was noted by @HenrikSchumacher the first methods works in the desired way because the eigenvalues of the matrix d are evaluated "analytically", i.e. each eigenvalue is given as a function of the parameter \[Delta]. Therefore, the plot shows them as smooth functions of \[Delta]. In the second plot, where the eigenvalues are calculated from the eigenvectors numerically, the colouring appears to be "wrong" because Mathematica at each parameter value reorders the eigenvectors according to the magnitude of the corresponding eigenvalues, and the smooth dependence on the parameter \[Delta] is lost. In many applications this is considered to be "right", but there is no "right" or "wrong", it depends on what you want.

v contains the norm squared of the elements of the eigenvectors. So, unfortunately, this primitive implementation of the said algorithm does not provide the phases. One can determine the phases as well, but for lack of time I refrain from doing this here, and instead use the numerically calculated eigenvectors of Mathematica to fix the phases. This obviously is a crutch, but sufficient for the demonstration here.

Now one can obtain the desired plot using a similar code like the one used for the second plot, i.e. the eigenvalues determined from the eigenvectors. But now the colouring of the lines is as desired. 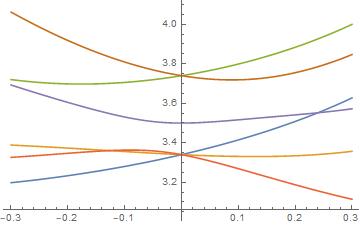 The eigenvectors used for the transformation of the matrix d are called A as in the OPs code. Most of the code above serves to implement the mentioned crutch.

Finally, a word about the algorithm used to determine the eigenvectors: This algorithm was rather recently proposed in the paper "Eigenvectors from eigenvalues" https://arxiv.org/pdf/1908.03795.pdf which is coauthored by the fields medal winner Terence Tao. According to this paper the method only works for Hermitian matrices, which is the case for the matrix under consideration here.

The issue is the Evaluate in

So a simple fix (and the only that I can provide at the moment) could be to generate a matrix of the plot data and to use ListLinePlot like this (which is basically what you did with the For loop):

User CATrevillian asked how we can recover an ordering that makes the eigenvalue functions differentiable. Exploiting that the eigenvalue curves (in this particular case) intersect transversally, one can use the following to obtain this ordering (up to a global permutation). 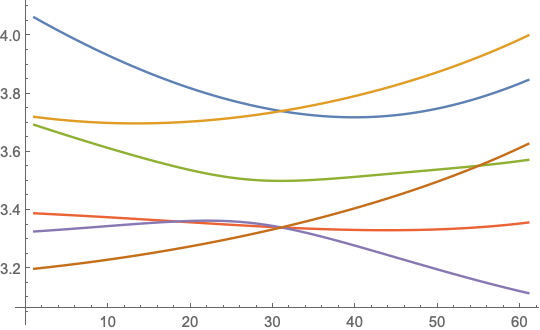 18
Tracking Eigenvalues Through a Crossing

22
How get eigenvectors without phase jump?
11
Incorrect Left and Right Eigenvectors in Mathematica
0
Large matrix: Finding eigenvalues and ordering it with respec to the highest coefficient of its eigenvectors
18
Tracking Eigenvalues Through a Crossing
6
Eigensystem returns vectors which are not eigenvectors