I cannot think of an easy way of doing it without involving an explicit calculation of what part of the sphere is directly visible, given the viewpoint, and what part is not... Any ideas?

Based on this answer and kguler's suggestion, I came up with this. For some reason (1) it takes a long time, (2) the mesh is not smooth (enough, for me), and (3) there's some mesh interpolation craziness on the "horizon", i.e., the boundary between front and back. For (2), I increased PlotPoints. For (3), it looks fine, until you rotate the plot, which you shouldn't do anyway: It's computed for a particular viewpoint.

We compute separate meshes for front and back. sidedMesh returns values of the parameter passed to it if the point is on the desired side; otherwise it returns a value out of range of the parameter, which will prevent the mesh from extending into the other side.

The basis for the sidedMesh function is parametricFaceCosine, which returns the CosineDistance of the surface normal and the vector from the view point to the point on the graph. This is less than 1 when the normal point toward the side the viewpoint is on, that is, when the surface faces forward; and it is greater than 1 on the back. (This depends on the parametrization, so you either have to calculate or experiment.) Note this does not take account of whether there are other parts of the surface between the viewpoint and a point on the surface; thus it should work well from all viewpoints only for convex surfaces. One unsatisfactory issue with sidedMesh is what to return when the surface is on the wrong side. I've wavered between $MaxMachineNumber for generality and 2. π for this particular problem. The documentation says that normally mesh functions should be continuous and monotonic, and this one isn't.

Mathematica's mesh routines are clever. If you say you want 9 lines, it will figure out how to do it, even if the range allowed by the mesh function is restricted; it will just cram more in. So it's best in this case to give explicit values for Mesh. Also, since the boundary cannot be split into dashed and solid parts, I offset the mesh lines, so that they appear evenly spaced. 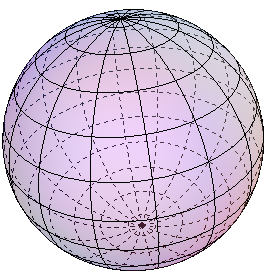 In the previous answer, there was a control to set the viewVec. Here a version of it, in case you'd like to use it: 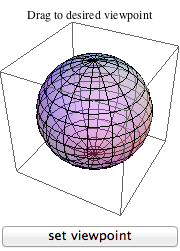 Here you can see the problem with the horizon. It is the sphere above rotated around. With fewer PlotPoints, it is much worse. On the right is a plot of the point density of the point generated in the plot. Not surprisingly, many more occur along the boundary between front and back (and of course at the poles). 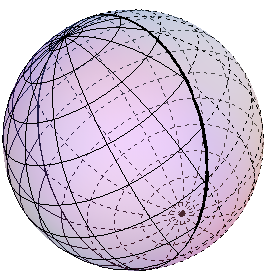 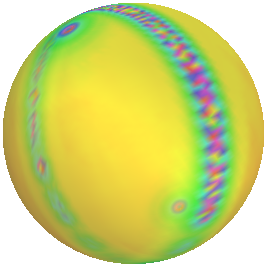 That it takes a long time is perhaps connected with the discontinuity of the meshes.

I know you really wanted dashed lines, but if you just wanted some contrast for the 'hidden' lines: 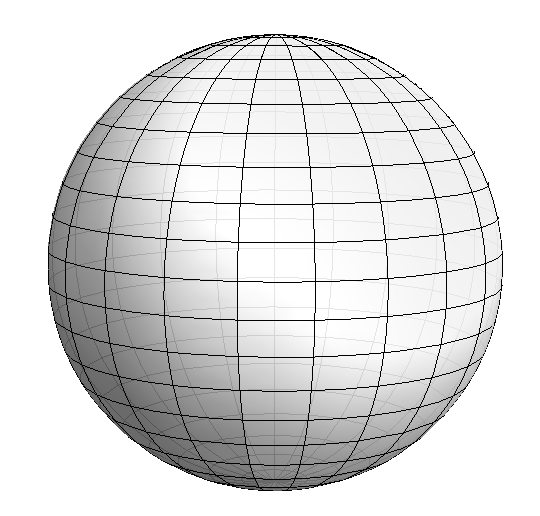 You could join two separate hemispheres, each with its own MeshStyle.

You may have to tweak the ViewPoint or the angles of the plot in order to hide the back mesh from view. In the case below, I simply moved the ViewPoint to {1, -10, 0}. 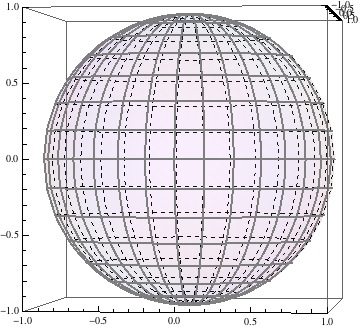 9
How to make a cylinder with bottom that shows hidden part of edge as dashed curve
110
Exporting graphics to PDF - huge file
69
Sketch-type graphics with transparency and dashed hidden lines?
19
Exporting a dashed plot with a color gradient to a vector graphics format ruins the dashing
11
How to draw the dashed line automatic behind of a pyramid?
7
How to draw two circles on sphere?
4
Transparent Cylinder with Dashed Edges only
8
Can I dash only the invisible edges of dodecahedron?
2
Can I draw a sphere using Graphics3DSketch?

1
Manipulate wrapping ParametricPlot3D - part spec longer than depth of object?
3
specify the same viewpoint for different figures
6
Volumes and moments of inertia of meshes in 3D
9
How to mesh part of sphere
2
Dashed hidden lines & Line-only Graphics3D
4
How to make a frustum of a cone
2
How to make a marginal distribution plot using DensityPlot?
2
How to make a 3D listplot with meshlines going only along one cartesian coordinate?