Plot a 2D vector path onto a surface

In my calculus 3 course, we're studying gradients and have a project that takes a combination of 3D Gaussian radial surfaces and a basic parametric path $r(t) = \{x(t),y(t)\}$ to see how the gradient changes and so forth with respect to the coordinates of $r(t)$ on the path. I need to figure out a way to plot the surface and path together. I've got both of them figured out, just can't combine them. Any ideas?

which is just a simple ellipse.

I'm trying to figure out a way to "lay" the path on the surface.

Some programming principles help us make short work of this. The key principle is to encapsulate what's going on.

First, the surface. It depends on some parameters, so let's be explicit about that, rather than letting those parameters run around loose as "global" variables. To illustrate, I begin by generating some (reproducible) random values for these parameters:

I am going to change the meaning of the $\epsilon$ a little, though: it is more natural that they be proportional to the widths of the "hills," so they will appear in the denominator below. Here is the "Gaussian radial" function:

Its first argument is an $(x,y)$ coordinate pair and its second is a list of the parameters. It computes the topographic elevation at $(x,y)$ by summing the values of the Gaussians at $(x,y)$. We can make a pretty pseudo-3D plot of the topography (and store it in a variable for later display):

Second, the key Calculus idea is that the hikers' path is parameterized by their base curve $t\to \gamma(t) = (x(t), y(t))$; it merely needs to be "lifted" to the proper height given by $f(\gamma(t), \ldots)$. (The dots represent values of the parameters controlling the shape of $f$.) The fully parameterized hike therefore is

Because we have encapsulated the key functionality, this is easy and straightforward to code:

(For a general-purpose solution you might want to make γ and f arguments of path, too, in keeping with the idea that everything a function like path depends on should be explicitly exhibited, within reason.)

Finally, use Show to assemble the plots of the surface and the path and control the final appearance: 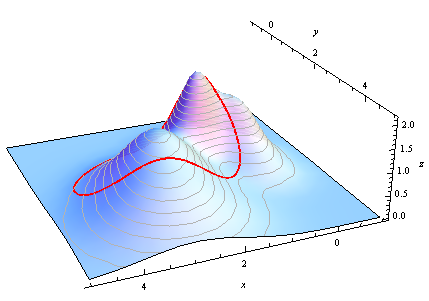 If you wish to study the hike in more detail, you may introduce a second parameter to path to fill it in vertically: let it multiply the $z$ value and range from $0$ to $1$. I will leave the implementation as an exercise and just show the result: 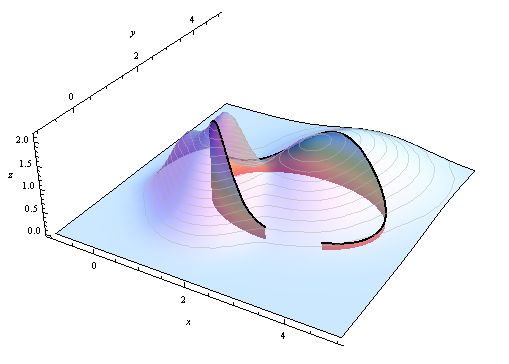 This also shows how the technique is capable of accurately drawing a hike which is not a closed loop. 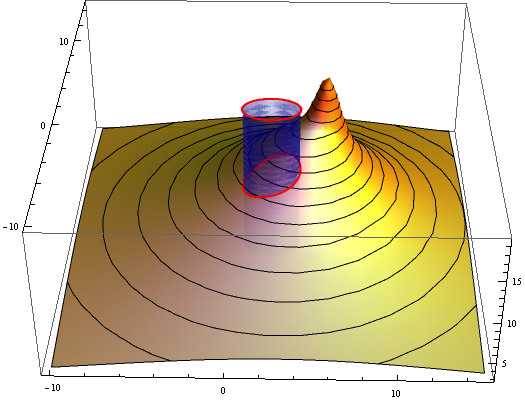 Silvia beat me to using MeshFunctions, but here's another way to use it. Similarly it works for this path, but not arbitrary paths, like some of the others. 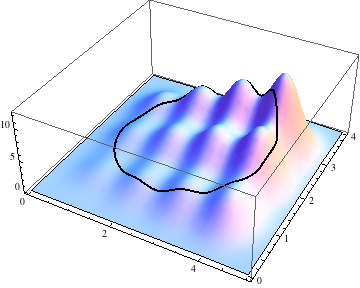 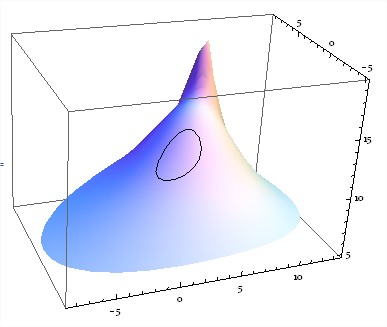 Not the answer you're looking for? Browse other questions tagged graphics calculus-and-analysis or ask your own question.

2
Drawing a shape on the mesh of a Plot3D
65
How to "Copy as Unicode" from a Notebook?
32
Finding Limits in several variables
6
plot a specific path on a surface
1
Empty graph for function
1
Plot a function over a specific domain
0
2D function on a 3D plot