What can I do to eliminate the error FindFit::nrjnum:?

I am testing the "Power Law with finite-time singularity" hypothesis for world population growth for a project.

The data I'm using (same behaviour should also be exhibited by the stock market, thats why I am trying this with financial data):

I was trying the following regression model:

And then the following curve fit method:

But I always get the result:

If I do a normal Power law regression, FindFit works perfectly, but the title of the project being "Power Law with finite-time singularity" I need to have the singularity c in the model and the main aim is to find when this singularity occurs.

Is there a way to use FindFit to get the correct answer? Or should I be using some other function?

I have seen other articles on this site concerning issues with FindFit, but none of them has helped me resolve this problem. 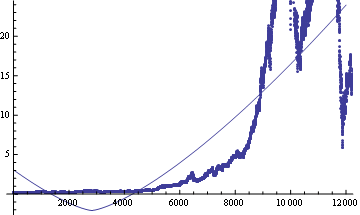 It looks to me like the data extends to the right of the singularity. Is it acceptable to simply remove that part of the data? It doesn't look like it could possibly fit the model. 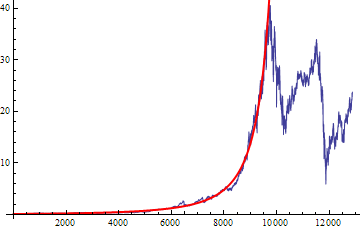 Not the answer you're looking for? Browse other questions tagged fitting complex singularity or ask your own question.

11
Trying to fit an unknown extreme distribution
3
Having Trouble Fitting Complicated Exponential Function with FindFit
1
Problem with fitting NonlinearModelFit::nrlnum:
5
How to use FindFit to optimize parameters of a WSM model via WSMLink for a parametric curve
0
An error when use FindFit to fit data
1
how to extract CountryData[] without String names for use in numeric analysis