I am attempting to use a Neural Network to solve differential equations based on a method I read in a paper. This involves constructing multiple separate NetGraph objects, where each one represents a derivative of the original NetChain that I would like to train.
To make this work, I had to use NetSharedArray for all of the weight and bias parameters so that the derivative network will be updated during each iteration of NetTrain as all of the parameters are updated.
The structure of my training network is as follows: 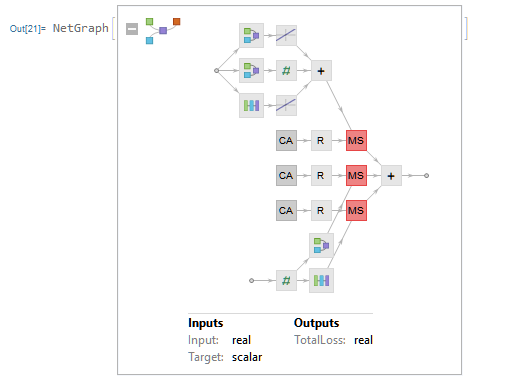 The top section plugs the input as a "Real" into three networks: the network to be trained, its first derivative network, and its second derivative network. The output of these is then multiplied by coefficients to represent the Second Order ODE in question and Totaled. This is compared with a MeanSquaredLossLayer[] to a real number which represents the right hand side of the ODE, inputted through a ConstantArrayLayer[].

The bottom section handles the initial conditions by taking the target value used in training (which is not really needed for my training), multiplying it by 0, and then plugging it into the network and its first derivative to get the current y(0) and y'(0) in the training iteration. Finally, these are also compared to certain pre-chosen values sent through ConstantArrayLayer[]s and all of the Mean Squared Losses are summed up and sent to the "TotalLoss" port.

Here is the code I used to train this network:

The training works fine and returns the trained NetGraph. But then when I extract the network to test it, I get this error:

For some reason, the NetSharedArray objects I used don't show any evidence of even being trained. When I actually check their values, only one has any:

I'm not sure why this issue is happening. I tried this method with a First Order ODE and it worked fine and produced solutions, but now I'm seeing issues with it. Is this due to a problem with NetSharedArray or is there a problem with my training graph?

I think I am experiencing the same issue. I am trying out some experiments to see if I can train a Bayesian neural net using gradient descent, and I am trying an approach using the Mathematica neural net functionality.

My approach involves using a NetSharedArray in a couple of sub net graphs.

If I manually replace the values and run the net forward it seems to calculate correctly.

However when it comes to training using NetTrain, it doesn't appear to be learning very effectively at all. I am unable to evaluate the trained network:

Interestingly if I try:

I get the output: Automatic which suggests the values have not been trained.

Not the answer you're looking for? Browse other questions tagged neural-networks or ask your own question.

8
Staged training of Neural Networks
4
Joint Training and multiple losses in NetTrain
7
Why I can only train some NetModel with GPU
3
How exactly does NetTrain use a ValidationSet (can we reuse it as TestSet)?
7
Fashion segmentation with a neural net?
0
On Formatting Input Data When Training Neural Network in Mathematica
2
Neural Network Simple task