I am trying to create an Alberti's window figure as described in this question, in which a (three-dimensional) polyhedron (e.g., dodecahedron) is projected onto a (two-dimensional) plane. I realized that the previous approach and solution of projecting points is not quite what I need. Instead, I'd like to project two-dimensional faces (in this case pentagons). Everything works except the final stage. Here's how I proceed:

1) Here are the vertices of the dodecahedron:

2) Here are the grouped indices of each pentagon face:

3) Here are the selected faces that are visible from the center of projection:

4) Here is the center of projection:

5) Here are the three-dimensional cones defined by a pentagon face on the dodecahedron and the center of projection:

6) Here's the region mesh of just the first such cone:

7) I'm projecting onto a plane defined by:

8) If I create the union of the cone and the projection plane, I get just what I expect: 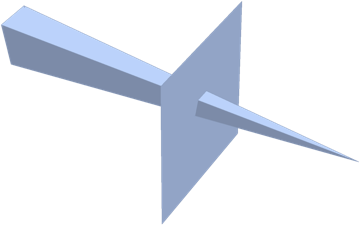 I have tried all manner of putting the elements in braces, creating Mesh or ConvexHullMesh, etc., without success. I thought the problem might stem from the embedding dimension, but both component regions are in three dimensions.

How can I compute the pentagon intersection region within the projection plane?

Since your clip-plane is axes aligned, we can use the 2 argument form of DiscretizeRegion to clip the solid in one direction, then manually pick the faces on the plane.

(If your clip-plane is not axes aligned, you could rotate your whole scene, clip, then rotate back.)

8
ConvexHullMesh sometimes excludes valid points from convex hull
16
Possible bug in RegionUnion or related functions?
4
Using RegionIntersection on Regions formed by RegionUnion
3
Computing the intersection area of two disks in 3D
11
Inaccurate result from ImplicitRegion
1
Exact symbolic area of an intersection of two regular pentagons with parameters
2
Why does this RegionIntersection return EmptyRegion?