The way Solve works has changed in v9 ... in essence, to get the answers that one obtained under v8, one now often has to specify a lot more information about all the variables and parameters, in order to get the desired neat solution.

In providing this extra detail on Input, across the board, so to speak, I have discovered that, rather unfortunately, the Solve function has a poor understanding of notational forms such as Subscript, Superscript, OverBar, OverHat, OverDot, OverTilde etc etc ... causing Solve[] to fail on even the simplest examples when such notation is used.

As a quick illustration:

... when, of course, Mathematica can trivially solve such examples.

Two clarifications on the above:

Do others have thoughts as to whether this behaviour in Solve is inconsistent? Or as they expect it to be? Or different to the way other Mma functions treat Subscript notation?

The reason why Solve fails here is that it does not understand that Subscript[y,1] and y are independent and unrelated. You can avoid this problem by making sure that you won't use the symbol from inside Subscript on its own. If you use Subscript[y,1], you can still use Subscript[y,2], but not y. The same applies for using y[1] instead of Subscript[y,1].

To understand the limitation better, compare

where fun can be an arbitrary function.

Solve is looking for symbols. If you symbolize your subscripts then it works fine: 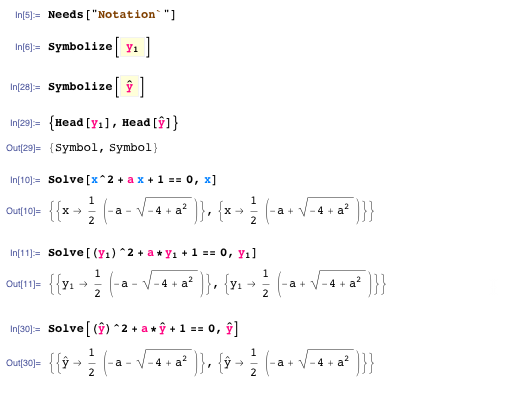 The pitfalls of Subscript and similarly Overscript etc. have been pointed out in the various comments, but this doesn't mean it's impossible to work with these constructs the way you want to. As long as you remain aware the issues, you can for example do the following:

For the special name y the Subscript function now substitutes a string. It is able to do that because I've given it the attribute HoldFirst. This makes the y in the subscript $y_i$ different from the variable named y in the equation.

Here is one approach to teaching Solve about inert notational constructs:

1
How to assign (and retrieve) variables with subscripts?
4
Recursion problem
3
Simplifying algebraically
4
Using Greek letters with subscripts as symbols
2
Replacing constant factors
2
How to treat Subscript objects as constants when using D
1
Using both subscripted and non-subscripted variables in an equation
0
Using Subscripted Notation without Introducing new identifier
0
Plotting a curve defined implicitly
0
Avoiding For loops to perform an assignment to a variable with indices of user-choice
See more linked questions

9
Optimizing the performance of an algorithm
13
solve ODE with divergencies
9
What's wrong with MovingMap + Apply[Rule] etc.?
41
What are some common issues with fitting functions to data?
1
NSolve Evaluated Too Early Inside NExpectation
1
Having trouble defining a function with head Superscript
0
Solve an equation with Laplacian
6
Remembering Previously Evaluated Function Values with Optional Argument