How do we optimise double Tables?

I have made the following code which I shall explain it in two parts:

This part of the code is fairly simple and easy to run. This is just the tool I need in second part of my code.

I first take the letters, there are 26 of them and make all the possible pairs: (there are 325 of them)

In the last part for each new LUerDelta I want to make a ratio of the coefficients for c= 1 and 2, but having two table command into each other makes this process very slow, I was wondering if there is a better way of doing this?

Here's a way to speed things up significantly more:

On my machine this is a about 30 times faster than Jack's:

The big thing I do here is I do here is that I drop any of the Select calls and instead use vectorized indexing operations and addition to do these things for me. I precompute all my arrays to index into. Then when computing the indices to pull I make sure to keep everything as a packed array using ConstantArray and the second argument to Join.

After doing that I avoid any symbolic processing, but the benefits of that are relatively minor.

There's a question about what:

I use that in Extract to pull out my precompiled positions from bigELPr. Then I add up the extracted values for pair[[1]] and pair[[2]] in vectorized fashion with Total. After that I use Pick to choose the elements in ELPrLens that correspond to a 2 in that summed up list of extracted positions, since 2 means both elements of the pair were in that element of ELPr.

First your expressions for English words with the alphabet broken down into lists of characters (only those that contain the alphabet), sorted with duplicate letters removed were copied from your question.

Intermediary variables were used so one wouldn't have to rely on using the % sign (not a big deal).

Your code was copied and the time it took was studied. The comments were modified so it would be easier to follow the structure of the outer and inner loops.

This took a little over two minutes on my machine.

Use Complement rather than SubsetQ

On this site a discussion of performance of the built-in SubsetQ function can be found here.

an increase of performance occurs if one uses

Note that the order of the arguments is reversed.

Another small enhancement was to compute LUer directly rather than using the intermediate variable LU.

This produces a significant increase in performance.

This is a speedup of approximately a factor of five.

One can validate that the answers are (within numerical roundoff) the same by plotting the original vs the last answers using ListPlot. 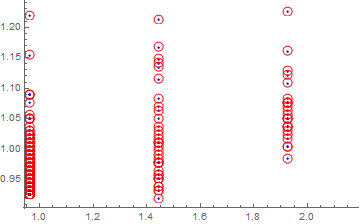 A significant increase in performance was achieved by replacing

This resulted in approximately 500% increase.

Not the answer you're looking for? Browse other questions tagged performance-tuning table iteration or ask your own question.

25
What is the fastest way to count square-free words?
1
How can I create a new tables out of a table and plot it
21
Instruct a Table to only evaluate until a condition is fulfilled
2
Deleting parts of groups that do not have equal dates
10
Relational joining of tables
0
Adding two tables with same x axis
7
How to thread over ragged list while skipping empty sub-lists?
2
Optimisation of a loop
8
Optimising Table wrapping over a Select