My Data has negative and positive numbers, can I still use it to get the PDF?

For the sake of giving a (hopefully) useful answer.

Now there are a number of things available to us in Mathematica for working with this data.

Or we could say, what is the probability someone is late?

We can estimate distributions from the data. Here a mixture of normals is used which is a little silly given that the data is discrete but normal is known to be a reasonable approximation to the binomial distribution with large enough samples and we expect a bimodal distribution given the setup.

We can plot all sorts of things and assess the goodness of fit to our chosen distribution. 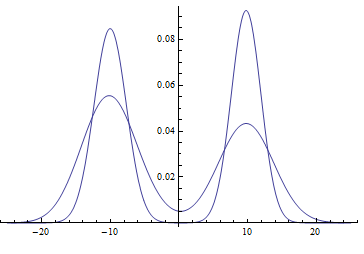 We should keep in mind here that the p-value will probably be larger than it should be since I've estimated the distribution from the data first...

We can always check further with a QuantilePlotwhich claims it doesn't fit so well in the body of the distribution... 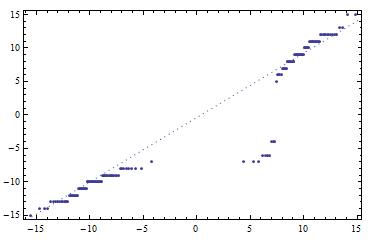 The bottom line is that there is nothing special about negative arrival times as far as Mathematica is concerned. It is happy to work with them just like any other data.

7
Fitting data to an ARProcess using FindProcessParameters
1
Integration of linked PDFs over probability simplex
8
How can I improve my prediction for the end time of the Reddit button game?
19
Using Mathematica to solve a probability problem
6
Computing Credible Region (Highest Posterior Density) from Empirical Distribution
4
Can this multinomial probability query performance be improved?
3
Efficient function for life duration probability?
9
Fitting in mathematica when dealing with non-gaussian noise and errors on the data points
2
Count based hypothesis test for inhomogeneous Poisson process