I'm looking for a general "recipe" to do with a keyboard shortcut what I currently do with a PasteButton. Here is a working toy example PasteButton:

It generates a capital Greek letter Omega (type in as \[CapitalOmega]) with a selection placeholder (black square) in the subscript.

To "keyboard-shortify" it, I know that I have to modify the file KeyEventTranslations.tr in

but what I have to put into this file is a lot more complicated than just copying from how the PasteButton does it.

If I wanted just the Ω without the subscript, associated with the keyboard stroke Control-Shift-Command-O, I would have to put the following:

but what I tried putting into the .tr file with Subscript did not work - it always put Subscript[something] literally into the current notebook 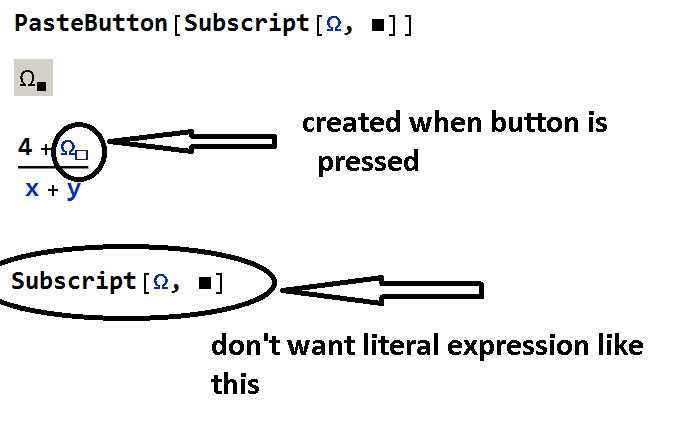 I tried to write some code with SelectionMove[] and SelectionEvaluate[] and putting that into the .tr file, but it didn't work properly, and was awfully hard to test (restarting Mathematica all the time)

A more-than-ideal answer would be a function to which you supply, say, Subscript[Ω, \[SelectionPlaceholder]] as an argument, and which generates the string to be put into the .tr file as result.

Side question: Is there a way to test the code later being put into the .tr file without restarting Mathematica all the time?

Why not use an InputAutoReplacements instead? For example:

Then you can type: w w Control+- to enter the desired subscript.

If you really want to use KeyEventTranslations.tr to do this, then you need to enter boxes:

Not the answer you're looking for? Browse other questions tagged customization keyboard palettes input-alias or ask your own question.