Tangent point coordinates when the curve is a set of points

I want to find the coordinates of the tangent point between a convex curve and a line that passes from a point with known coordinates (0,b) ("efficient portfolio" in finance). My problem is that the curve formula ("efficient frontier") is not known, hence it can only be inferred from a set of pre-calculated points. Important points.

1) I am only interested in the upper part of the curve starting from the left-most point. 2) The tangent point is unique. 3) Quadratic Fit did not work (please see below) since it failed at the more convex part on the left (the curve may appear flat).

The output should ideally be a set of coordinates (x,y) or a set of rules.

I provide a dataset for the curve in a DropBox link here...

...a plot of the quadratic Fit curve in blue together with the plotted data in red ("efficient frontier") and a general drawing of the solution. 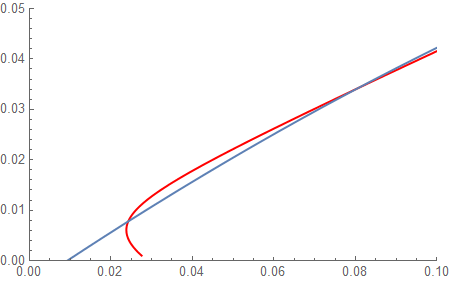 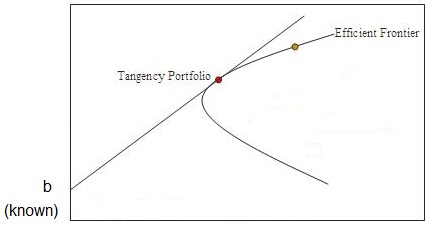 I know there are many similar topics, but all the ones I found refer to tangents where the equation is known. I include a toy code that produces a solution based on MarcoB's answer here for b=2 but I don't know how meaningful it is since the curve function is known.

Assuming the curve is convex and $(0, b)$ is "outside" the curve, you can use the convex hull of the point and data. 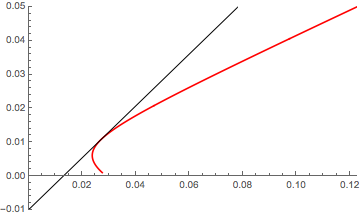 You could also use the simpler but slower:

Perhaps this approach finds your interest. I try to calculate the minimal cone(peak at {0,0} ) including all points! 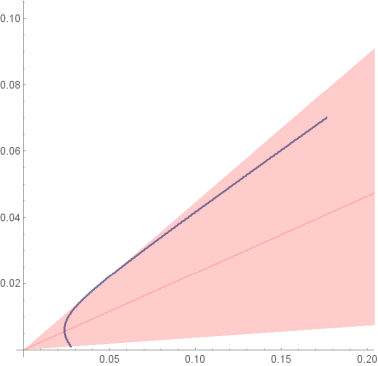 The minimization can easily be extended to higher order dimensions.

Not the answer you're looking for? Browse other questions tagged equation-solving fitting or ask your own question.

8
How to find a tangent line with 2 points of tangency for a curve?

25
Generating an "average curve" from a dense set of "semicontinuous curves" which clear trends
3
Marking the points of x-intercept on a plot
14
Curve fit based on minimal data
5
FindFit “is not a real number” error when fitting a parametric function to the data
2
How can I fit cyclic experimental curve with a couple of differential equations?
3
Knowing the functional form, how to find best-fit parameters and their uncertainties for a set of raw data in Mathematica 8?
5
Two ways to fit a function on data points
0
FindMaximum for LogLikelihood fails for multiple parameters