I am looking for a possible way to simulate the temperature effect on a collection of atoms sitting within a double well potential, say something like 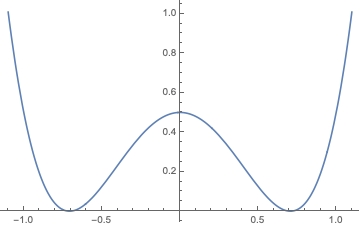 I have written the following code to simulate the random population versus temperature :

In this case I have assumed a random distribution in the x axis (can be a position), while along the y-axis (energy) I have assumed an exponentially decaying probability, where \[Lambda] is the parameter of the exponential decay and can be seen as the inverse of the temperature. For high \[Lambda] the population is localized in the bottom of the potential well; while for low \[Lambda] filling it more.

Q1 : I see that running the Manipulate function the code is running twice per every lambda selected, this is probably due to my limited understanding of local variables in the Block function and the fact that I have 2 separate functions, for the 2D plot and the histogram.

Is there a way to have a similar output using only 1 function? Can the code be optimized? Already now going beyond n = 10^4 makes the calculation very heavy.

Q2: Now assuming to fill only the right side of the potential (changing samplex = RandomReal[{-1.1, 1.1}]; into samplex = RandomReal[{0, 1.1}];, I am trying to apply an approach as discussed in How to set up a simple Monte Carlo Simulation, to randomize even further in time the position of the n atoms. In practice what I want to see is the amount of redistribution into the left side starting from the right side population. At the moment I was not able to successfully merge the codes into a working set.

Thanks a lot for any help you can provide!

This is a restyled code you can start with

There is no need for auxiliary variables and procedural commands like Table, If etc.

Not the answer you're looking for? Browse other questions tagged probability-or-statistics code-review code-request simulation random-process or ask your own question.

9
How to set up a simple Monte Carlo simulation?