Is there a tool for editing the spelling dictionary?

For removing a misspelled word from the correct word list, go to Edit->Preferences, select the Advanced tab, select Open Option Inspector, lookup/search for SpellingDictionaries, click on the edit button for the CorrectWords entry, highlight the incorrect entry and select remove. 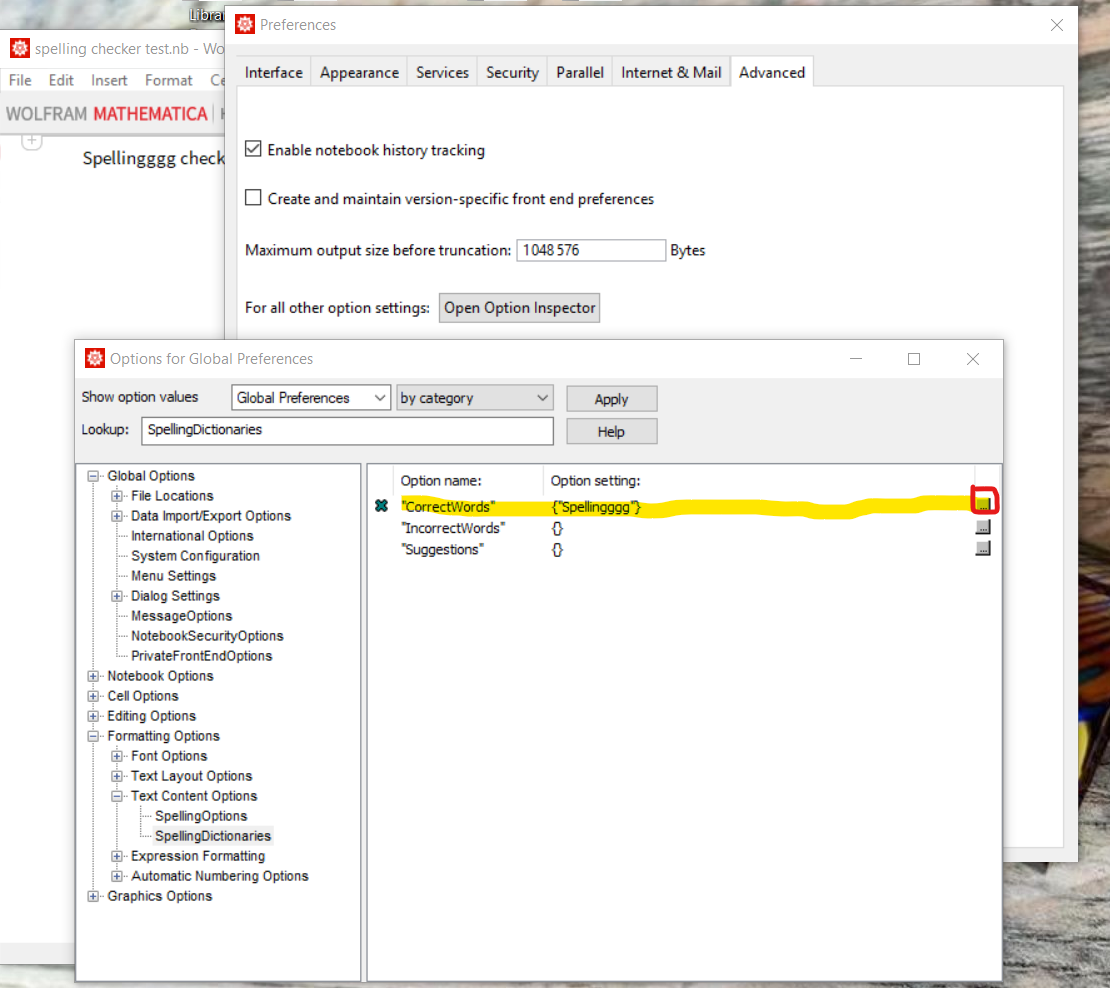 Answer by ciao shows a way to edit user-supplied list of correct words via GUI. The same can be done via setting $FrontEnd option:

The meaning of the sub-options is documented:

Note that there is also the "IncorrectWords" option with rather strange documented meaning: "... if any word in the list is found, the spell check stops...". I would assume that the spell checking doesn't stop at such word but rather marks it as misspelled.

Can there be other hidden locations for accidental additions? Or does Mma actually recognize Euclidian (vs Euclidean) as a correct word, which just happened in my v.12.

Searching through all textual files in the directory

reveals that the whole word "Euclidian" is indeed present in the files "en_Supplemental.dic" and "ro_RO.dic" located in that directory. So it looks like the word "Euclidian" is indeed considered as a correct word by Mathematica's spellchecker because it is included in one of the basic dictionaries for English. We can try to add this word to the list of incorrect words via the "IncorrectWords" option:

Unfortunately it doesn't have any effect: even after restarting Mathematica this word isn't marked as misspelled. I would consider this as a bug.

P.S. It is also interesting that this word is present in the file

UPDATE1. I've moved the file "en_Supplemental.dic" outside of the $InstallationDirectory and then restarted Mathematica. After the restart the word "euclidian" is still considered as correctly spelled. So there seems to be some other place from where the spellchecker takes it...

UPDATE3. Searching for the word "euclidian" in the all files in the $InstallationDirectory (including binary files) reveals that it is present in the following files:

Especially suspicious is the file in the directory "SpellIndex". But even moving this directory outside of $InstallationDirectory and restarting Mathematica doesn't change the described behavior...

UPDATE4. The Entity framework considers the words "euclidean" and "euclidian" as synonyms:

Not the answer you're looking for? Browse other questions tagged customization configuration dictionary spellchecker or ask your own question.

16
Set spell checking language
2
Which words are “protected” from the built-in spell checker?