How do I use the ::usage tag to allow the Mathematica v9 front end to know that there are multiple ways to call an overloaded function (a function that can have different number of arguments?

For example, if I sequentially run the two commands

The second line has overwritten the first and the front end doesn't know about both cases. A built-in example of what I'm talking about is Table which the front-end recognizes as having many different templates.

As of Mathematica 9, multiple autocomplete templates are supported and the different templates are delimited by newlines. So for your example, you'll need to define them as: 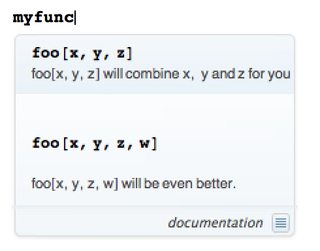 0
mathematica function autocomplete issue
26
Template completion
16
Better Autocomplete for the Front-End
4
Generate a list of all user defined functions including their argument patterns
3
Can I create a mouseover summary or documentation for a new function?
1
Notebook UI: Autocompletion - Display function arguments when typing?