Can we use Mathematica for electronics design?

A spoiler alert: I intend to answer my own question. I am posting this because I would like to share my excitement regarding the control theory tools in Mathematica, and also to promote further discussion.

I invite any and all to criticize what I post, correct any errors, and add to the discussion!

An example of electronics design is the design of amplifiers using operation amplifiers (op amps). One common configuration is the inverting amplifier depicted below in a schematic entered in LTSpice (a free spice tool from Linear Technology).

The amplifier makes use of an LT1365 op amp and is designed for a gain of -2. In this implementation, a 10pF capacitor Cp represents parasitic capacitance as may be found with some implementations. The op amp has a single pole in its transfer function. The effect of the added capacitance is to produce a second pole in the feedback path. The two poles therefore appear in the loop gain and threaten to add 180 degrees to the phase delay turning what was negative feedback into positive feedback -- producing instability and even threatening oscillation. What can be done? One method is to introduce a zero in the feedback path to improve the phase margin. We do that with Cf in parallel with Rf. How to choose its value?

First, we use the control theory tools to develop a transfer function model for the closed-loop system:

The nominal transfer function has a value of zero for Cf -- that is no compensation. We see the effects of instability in both the frequency and transient response. The circuit is close to oscillation. 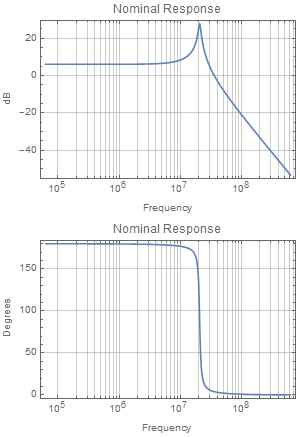 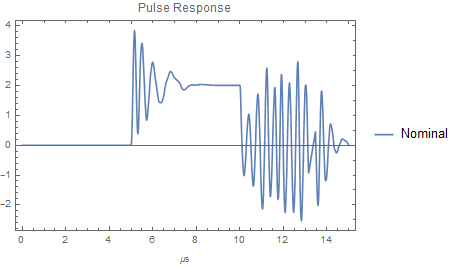 We want to determine a value of Cf that will quench the ringing but still provide a fast transient response. The root-locus plot is the perfect way to do that. 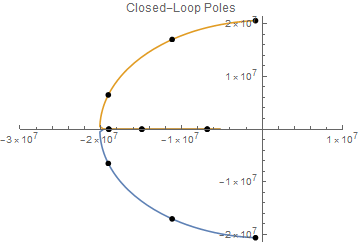 We can see on the root-locus plot that with no compensation the two poles are nearly on the imaginary axis -- close to oscillation. Using a set of values for Cf we find the value that brings the poles down to the real axis.

We now have a smooth frequency response: 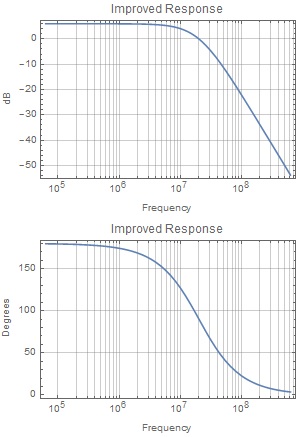 The transient response is just what we want: 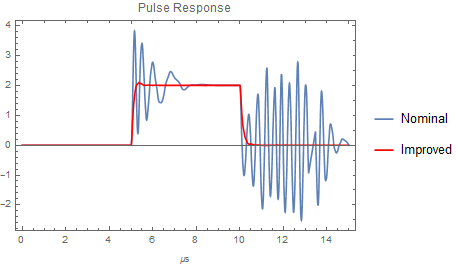 It is interesting to compare this with an analysis in LTSpice. It will not be exact, Spice will use the actual op amp model, not just a 1 pole roll-off. But it is quite close. (And note that in Mathematica we get the use of root-locus as a tool.) 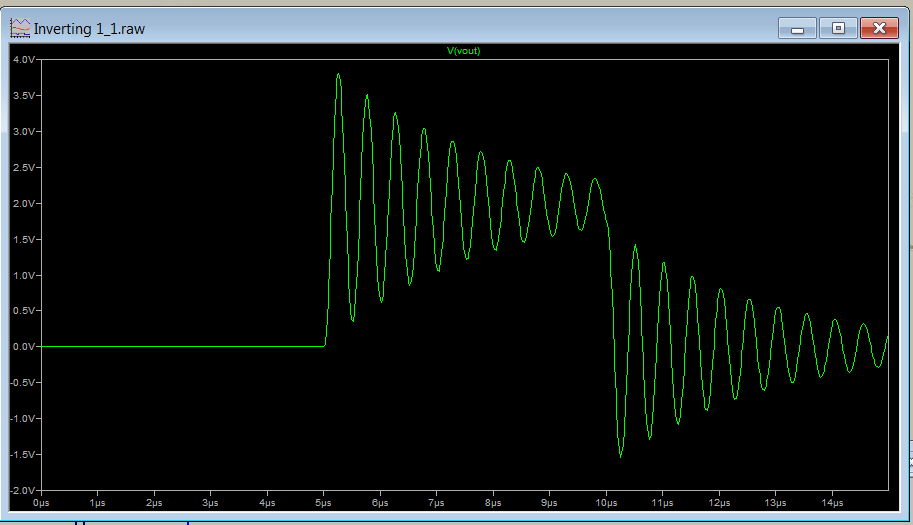 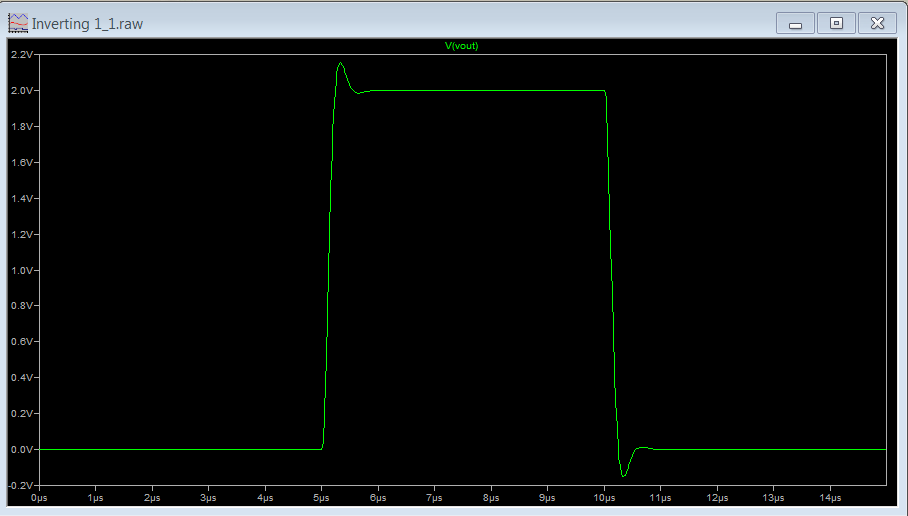 So I hope my fellow Mathematica fanatics find this interesting. For me -- who started out doing this stuff with slide rule and graph paper -- it is fantastic!

In response to the comment by andre314 that the label on the frequency axis on the bode plot should be radian frequency -- I agree. But I would really prefer frequency. I have tried to implement that using ScalingFunctions like this:

However, when I evaluate BodePlot it returns an error that the value of option ScalingFunction is invalid. I suspect that BodePlot does not accept the user-defined value for ScalingFunction as described in the documentation.

Does anyone know how to get BodePlot to plot in frequency rather than radians/sec?

You see the results below. The output does not agree with the output obtained in the first method. But it does agree with the simulation in LTSpice. (The frequency of ringing is slightly different, but so are the op amp models.)

It might be that I have made some error. Or it might that the system is close enough to unstable that a slight difference in the numerical methods show a burst into oscillation (like after the falling edge in plot[2] ) in one method and not in the other.

Here is the work: 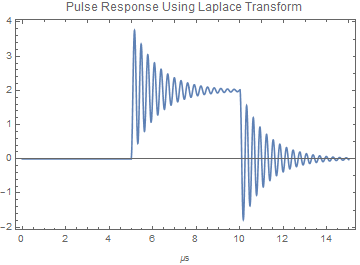 And here is a fix for this problem thanks to the comment from Andre 314: 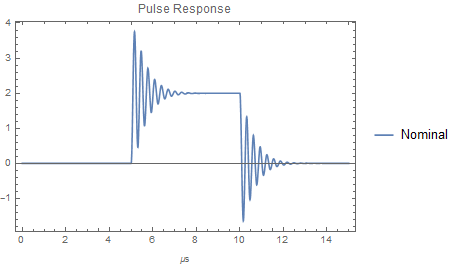 The damping appears slightly stronger, but the overall characteristics are quite similar to the Laplace transform method.

I reduced the step size until the output no longer changed. 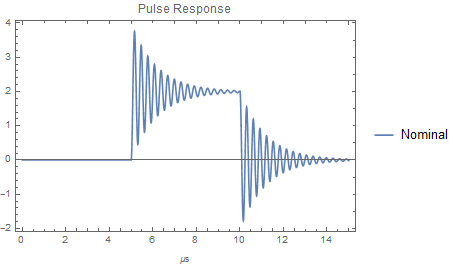 EDIT 4: I have posted a summary of the convergence issue to Wolfram Community here.

I've been exporting schematic designs from geda-gaf to Mathematica for many years using its "mathematica" exporter together with code that has a new home at https://github.com/noqsi/gEDAmath. This also works with Lepton-eda.

The notebook there shows how to create linear transfer function models for the kind of analysis you are doing. While this development predates Mathematica's system modeling machinery, it is easy to apply the new functionality here.

Not the answer you're looking for? Browse other questions tagged control-systems or ask your own question.

22
Can we use Mathematica to design an electronic active filter?

29
Numerical optimal control
3
Multiple Output with OutputResponse in Mathematica
1
How to set a limit and initial value for transfer function in Mathematica?
3
Unable to find proper solutions through “Solve” or “NSolve”
2
Mathematica returns 1 for the denominator when clearly it isn't equal to 1
2
OutputResponse and contradictory control models
1
Manual control plots differ from StateResponse and OutputResponse
7
How to implement a Kalman or LQG regulator in the control of classical pendulum problem
22
Can we use Mathematica to design an electronic active filter?