Why use Column with Rows instead of Grid?

In general, what are the advantages of using Grid versus a combination of Column and Row? Is Grid better in some situations but not others?

For example, is there any reason why one would do this:

There are several differences in behaviour. One is that Row will be line-wrapped if it does not fit the notebook window:

Also with Grid the alignment is global, so the $n^\textrm{th}$ elements in each row will always line up vertically with each other. This is not the case with several Rows in one Column. 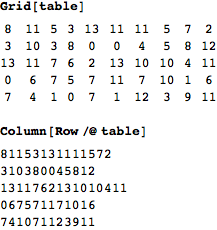 Grid allows merging several grid cells too (see e.g. SpanFromLeft). This is just some of the most obvious differences.

If I am making something ad hoc I often use Column and Row but later re-write as Grid once I have settled on what I want. I find Grid easier to maintain and more flexible.

Grid and Column are both GridBox whereas Row is RowBox. There are some limitations with RowBox -- for example one thing that comes to mind is limited FrameStyle compared to what is available in GridBox

For some reason I always seem to find it easier to position elements in a Grid cell than a Row -- maybe just lack of perseverance on my part (?). Row allows numbered alignments Alignment->{-0.5,0.5} but I don't really see the point. On the other hand this would be useful in Grid but a known bug since at least V7 prevents it from working.

Not the answer you're looking for? Browse other questions tagged formatting or ask your own question.

25
Making a presentable BarChart
18
How to raise the LegendLayout "Row" size
2
Remove braces, {}, from around DynamicModule output?

7
How to suppress undesirable kerning rules in math inline cells?
8
Changing parenthesis size for typography
0
Unwanted parentheses appearing in a notebook that is opened by a button
6
Mixing Text and Formulas
0
Using a table to format a grid
2
Embedding hidden information in styled text
7
What is the best way to draw a shaded table?
0
Create new style where elements are arranged in a grid
2
How to create formatted math formulas that contain formatted strings?