I have a design that I've produced in Mathematica, consisting of two sets of Rectangle objects. The second set is a mirror image of the first and was produced with array2 = Scale[#, -1, {0, 0}] & /@ array1.

I'm experiencing two issues when I Export the Graphics object to DXF: 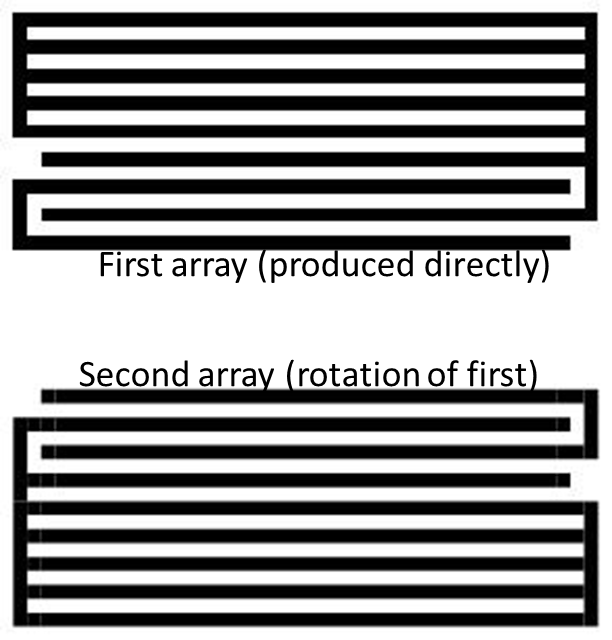 Importing the DXF file back into Mathematica also shows that the bottom half is missing. I'm at a loss here - what am I doing wrong? Are either of these weird behaviours deliberate?

Edit: Here is a snippet of my code. It generates the design for a surface acoustic wave resonator. This consists of two transducers next to two gratings, each made up of metal strips, separated by a certain number of wavelengths.

Smells like a bug to me (check e.g. Export to PDF, which works). Scale is only evaluated when rendered... anyway, this works for me (without changing the triangulation thing):

As for the triangulation, not much you can do in DXF. Perhaps use PDF or EPS and import that (or try other available Export vector formats. Or export Line primitives and convert those in AutoCAD to a polygon. Alternatively, roll your own DXF export, which may or may not be overkill.

Edit: Here is one homebrew-version of DXF export for those special occasions: Export ContourPlot as DXF.

Not the answer you're looking for? Browse other questions tagged export or ask your own question.

8
Export ContourPlot as DXF
3
Exported 2D geometry to dxf has units in inch instead of mm
3
Export::nodta: error on attempting to export a Graphics3D as an .STL file