Why do I get different symbols (a) with the same FontFace (Cambria Math)?

When I create an equation in MS Office, it uses Cambria Math, and I get the following when I use variable 'a'.

When I try to use Mathematica to create graphics for my files, I can try to use Text[] with Style["a",{Large,"Graphics"}] and it gives the following.

Uhhhhhh.... I get that Mathematica uses this archaic style for the letter a, but how do I tell it to give me the same thing one would expect from using the same font face in two different places?

Edit: I turned off italic in the MS Office equation environment and it reverted from the script style to the antique style, so I tried turning on Italic in Mathematica, but that didn't work.
Style["a", {Large, Italic, "Graphics", FontFamily -> "Cambria Math"}]

When I look up Cambria Math on the web, it has a double-storey a, not a single-storey ɑ, for the regular letter "a." In my Mathematica (MacOS), there is no Cambria Math in $FontFamilies. Hacking MS Word file failed to reveal anything to me. So it's hard for me to check, but the following seems likely: The character being used is probably from the Mathematical Alphanumeric Symbols, Unicode 1D44E (MATHEMATICAL ITALIC SMALL A): 𝑎.

You can get it in Mathematica:

The glyph is mishandled by Mathematica (in V12, MacOS). Here is the input form and how it is typeset:

There is a lot of extra space following the letter. From the FE editor's point of view, there is an insertion point in the middle (sorry, don't know how to show that). One can delete part of the space, but it changes the Unicode character to one that sometimes CRASHES the kernel when you evaluate it. BEWARE!

Using the character is difficult because of this. It is not centered: 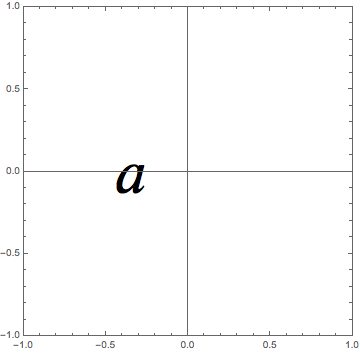 Adding some spaces on the left can get it close to centered: 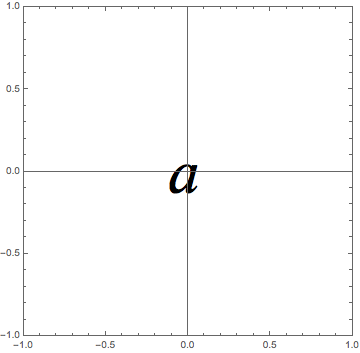 Add a "\[ThinSpace]" will get it very close. Of course, it all depends on the font used.

If you look at the fonts installed in Windows there is "Cambria Italic" font and "Cambria Math" which is not italic and very different. Try the code

which looks almost exactly the same as equation mode in Word. I did notice that in Word there is a gap between "f" and "g" and the serifs are slightly different and curvier. This is most noticeable in the "v" in Word. Other than that they are very close. An expert in fonts will be able to detect the difference right away, so there is still some mystery here. Where is the font that Word uses for equation variables?

I made a test document with "a" through "z" equation variables and saved it as a "docx" file. I looked at the XML files inside it and found reference to a few fonts but none of them looked exactly like ones used for Word equation variables. Still a mystery to me.

Not the answer you're looking for? Browse other questions tagged output-formatting style output fonts or ask your own question.

24
Fontsize is too small
10
Inconsistent display of TraditionalForm in version 9
7
FontSubstitutions: how do they work?
31
What are all the named Mathematica styles?
2
Making single letters non-italic in Graphics/Text/Style objects
9
Webdings are different on V10 vs V9. Why?
6
Problems with exporting graphics in PDF format
6
How to fix inconsistent font rendering under Windows?
2
Fonts not rendering correctly on the cloud