I'm trying to calculate the collision cross section of black holes, more precisely, I want the critical impact parameter $b_{\text{crit}}$ for a given initial velocity $v$ such that, at this speed, any smaller impact parameter would result in the particle crossing the event horizon. I have code which evaluates each step in the reasoning, but I'm having trouble getting it all to work together.

(1) from the impact parameter and initial speed, numerically integrate the equation of motion to get $r(\phi)$

(2) Get the distance of closest approach $R(b,v)$ as a function of the initial motion parameters.

The equation of motion is

To do this I have the code

Wherein lies the problem: In some cases, the particle is actually captured by the black hole, so $r$ will tend to zero and bad things will happen near the singularity. And in some cases the particle gets captured for very large $\phi$ (p in the above code). So I need some condition to set the range of p to look at.

One way to solve this would be to evaluate

Where I've chosen some values for $(b,v)$. If NSolve finds a solution to this, then the particle gets captured, so the answer will be a larger b, for fixed v, if NSolve finds no solutions to this, then the particle won't get captured and $b_{\text{crit}}$ is smaller. Maybe some sort of bisection would work but I'm not sure how to do this in Mathematica.

EDIT: Here is a diagram to make things a bit clearer:

If ever $r$ is less than one, then the particle gets captured. $\Delta\phi$ is the deflection from the straight line path that the particle would take if there was no central mass.

In playing with the relationship, it doesn't appear that there is a value for the product b v such that for some p you have Min[1/u[p]]==1. Rewriting your code in terms of a single term bv... 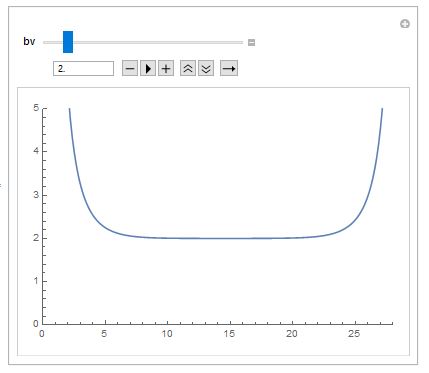 The value of bv=2 seems to be special, as when set, we can directly solve the differential equation.

In playing around, no luck with other values.

Not the answer you're looking for? Browse other questions tagged differential-equations numerical-integration physics numerical-value or ask your own question.

5
How to find the roots of an equation which is almost singular everywhere
7
How to add (energy) constraint when using NDSolve to Equation of Motion
1
Stability of collinear Lagrange points
6
Black hole orbit in Mathematica
2
Is NDSolve being precise here? Light deflection angle
6
Interpreting Mathematica code on black holes