What is a proper way to represent multidimensional data in TemporalData?

A TemporalData object can host multiple paths or it can admit a ValueDimensions option value greater than unity.

In the former case, using the Values property of the TemporalData object, produces a list of paths -each list represents a different path- while in the later case, one obtains a single path, but, instead of a single value per time instance (t) in this case, one obtains a list or vector per t.

To make the issue more concrete, consider having $T$ observations. In the former case (many paths, single ValueDimensions), with a number of $k$ paths, the data in the TemporaData object have dimensions $k\times T$.

On the other hand, in the later case, setting a ValueDimensions value equal to d, yields an underlying data structure with dimensions $T\times d$.

On a first glance there seems to be little in common between the two representation. Consider now what would be the case if it so happened that d=k. In such a case, it would seem, that the former data representation is the Transpose of the later (or viceversa). With that occurrence in mind, my question is about making the most out of the TemporalData functionality.

What are some guiding lines on how to represent data using TemporalData objects? When the time stamps of the values are the same for all paths, aren't the two representations discussed above, equivalent?

Is there a use case where the two representations are not equivalent (for common time stamps between paths)? Has anyone dealt with situations where either of the approaches is strongly preferred to the other ?

The answer is: it is a matter of definition. Please note that the properties will very much differ depending on the approach - one observation of vector data or multiple observations of univariate data. Only TemporalData supports multipath option. For a single path one can also use TimeSeries. The main difference then is that value at a given time stamp is a vector for single path vector time series and a DataDistribution for a multipath TemporalData. In terms of storage both approaches will attempt to store the values as a packed array, but will exhibit different behaviour under processing functions. So in my opinion the choice boils down on what one wants to be returned at a given time stamp: a value or DataDistribution. ResamplingMethod can be set in either case to override the default. 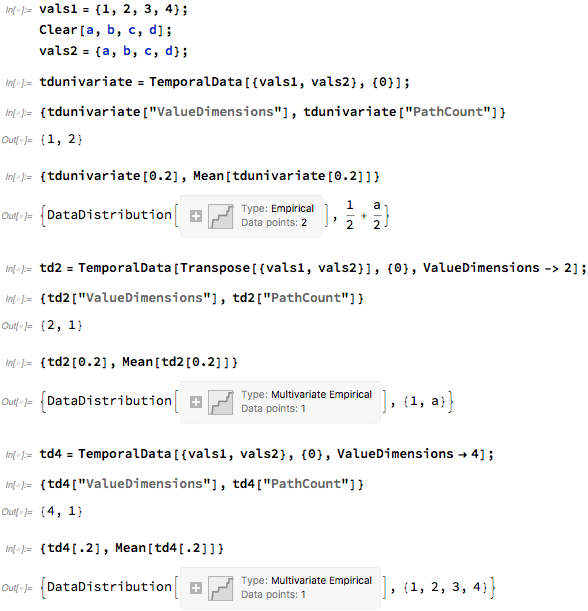 I hope this is helpful. I will be happy to discuss more if needed.

Not the answer you're looking for? Browse other questions tagged fitting options time-series temporaldata or ask your own question.

2
How to combine TimeSeries of different dimensionality into TemporalData object?
5
TemporalData, RandomFunction, Loops: Extracting data from TemporalData sets?
7
How to specify RegularlySampledQ TimeSeries with EndOfMonth date unit MinimumTimeIncrement?
2
Intersection of TimeSeries (reducing a list of TemporalData objects to common dates)
2
chisquare fit to multiple data sets
4
Plot dimension m of n ValueDimensions in TemporalData: with proper temporal values
2
Fitting two equations to diferent parts of the same dataset
1
Generate clusters based off clusters in previous time step?
1
How do I correctly iterate using Outer when an argument / slot is a nested list?