Whenever I try to create a Graphics object in a Mathematica notebook, the output is always "-Graphics-". I have searched and found others who had similar problems, but attempting to implement these fixes have not been successful.

The offending option seems to be the "CommandDefaultFormatTypes" "Output" option. Others have recommended changing this to "StandardForm". After I made this change, then ran the plotting command, the output was still the same- "-Graphics-".

I am running Mathematica Version 11.3 on Windows 10 on a Microsoft Surface Pro.

Though it might not be possible to diagnose the specific issue, perhaps a workaround that would allow the Graphics to be viewed?

This converts that cell to "StandardForm" and the Graphic appears. A long term solution that changes an apparently hidden setting is still desired.

You could also use CurrentValue to reset things. Reproducing your situation: 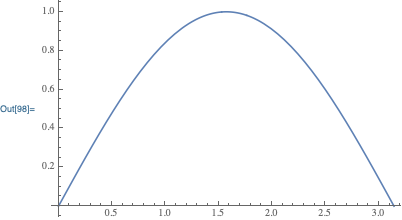 As suggested in @Szabolcs comment, the init.m file was the cause of the problem. The most direct way to fix this problem is to open the directory with your init.m ( SystemOpen@FileNameJoin[{$UserBaseDirectory, "FrontEnd"}]), quit Mathematica, open the init.m file with a program other than Mathematica, find the line with CommonDefaultFormatTypes, and change "OutputForm" to "StandardForm" (without quotes).

Not the answer you're looking for? Browse other questions tagged plotting graphics output-formatting or ask your own question.