How can I compute this?

would result in the same value, but they don't, so, which is it?

I believe it is the latter, but I thought that the first one results in the same value. Thanks.

Not an answer, just some observations that take up too much room for a comment.

Integrate and NIntegrate give two different answers. Since your integral evaluates to a number, it is always easy to do a spot check on the symbolics side of the house:

Your second integral didn't evaluate cleanly for me until a let MMA know y was a real number for the inner integral.

The plot of the region rp=RegionProduct[reg,reg] is a little odd, although the area computation comes out right. Couldn't figure out if the clipped corners are an artifact or not. Doesn't seem like enough area to make up the difference between 24 and 37.333, but suggests something odd is going on behind the curtain. 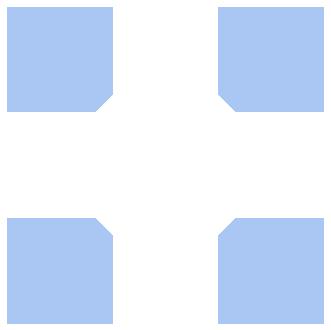 Both integrals do fine if the function is just 1.

Not the answer you're looking for? Browse other questions tagged calculus-and-analysis regions or ask your own question.