How can I make Graphics objects clickable?

I have created a list (listA) that specifies disks based on color, center point, and radius:

I have also defined a function displayList to display the disks with Graphics: 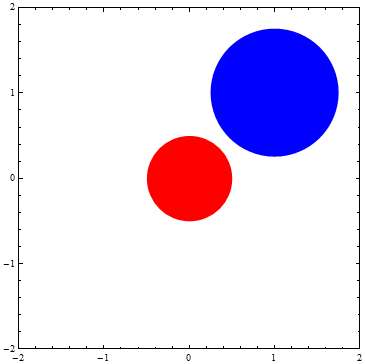 Specifically, I want the following:

How should I go about approaching this problem? Should I think about defining a Locator for each disk?

There are lots of ways to do what you ask for. I decided that an implementation based on FlipView and Insert would be fun because I had not used that approach before. Also, I decided to use an association to hold the disk parameters because I believe doing so makes the code more readable. 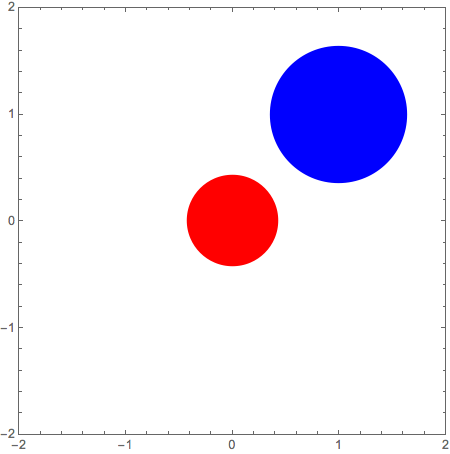 Clicking on either the two disks will change that disk's color.

The problem with Graphics within Graphics is that the inner one won't respect things like AspectRatio or coordinate system in general.

Here is how I would do it, with Dynamic @ color nothing but color needs to be reevaluated. For more complicated cases it is crucial not to rerender the whole graphics again and again and not to transfer redundant data between kernel and frontend.

I really like goldberg's idea of using Inset. Here is an extension which includes a readback of the current state:

It uses a second argument to FlipView:

FlipView[list,Dynamic[i]] takes the displayed object to be specified by the dynamically updated current value of i, with the value of i being reset if a new object is displayed.

A unique symbol is created for each disk in diskData that will hold the current state of the disk in FlipView. With is used to inject the symbol into the Dynamic statement.

One possible issue is that new unique symbols are created for each evaluation of diskData, and that there is no garbage collection for symbols which are no longer used.

Not the answer you're looking for? Browse other questions tagged graphics dynamic gui-construction interactive or ask your own question.

9
Is it possible to make a variable wrapped in Dynamic non-dynamic?
12
Coloring Points in a Plot, based on their position in the list
5
Selectively updating individual graphics in a dynamic, multiple-plot Show
13
Clickable graph
2
How to combine Graphics primitives in a DynamicModule without breaking it
2
How to display colored graphics object in the same color space?
2
How to prerender / rasterize a graphic without losing location information