I would like to plot a Graphics3D object using a fisheye view like, for example, the equidistant fisheye described here, where the distance R of a point from the centre of the image is proportional to the angles θ between the points in the real 3-dim scene: R = f×θ.

For illustration, let's take the Graphics3D object produced by the following Mathematica code 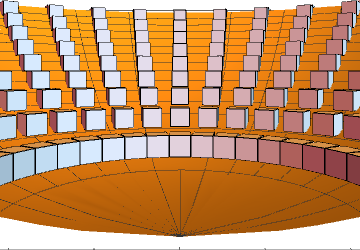 How can I view the same scene using a fisheye view instead of the usual perspective?

For reference, here is an example of fisheye perspective from MathWorld

I follow the approach suggested by Alex, which was taken from the Mathematica documentation of ImageForwardTransformation. But the required explanation and changes to produce an actual fisheye view are too extensive to be included in a comment, so I write them here.

As mentioned in my comment to Alex's answer, the key is to use as the radial coordinate of the ImageForwardTransformation the angles between the objects in the scene, as seen from the observer. This would produce the ideal and most common fisheye view, which is the equidistant, or equiangle, fisheye. But other fisheye formulas can be used by simply replacing the angle with a function of angles.

The key is then to obtain angles to the centre of the view for the pixels in a Mathematica image. Mathematica uses standard perspective for which is easy to show (see figure below) that the angles are given by theta = ArcTan[R/d]. 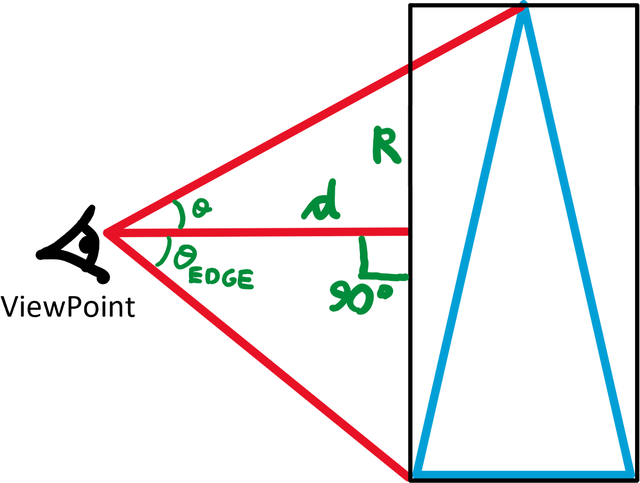 But to obtain proper angles from the image pixel units one has to consider the definition of ViewPoint and the bounding box of the Graphics3D object:

ViewPoint -> {x,y,z} gives the position of the view point relative to the center of the three‐dimensional box that contains the objects.

Other key steps for the fisheye view are (i) to place the ViewPoint orthogonal to the bounding box (two ViewPoint coordinates have to be zero), (ii) as close as possible (but at a finite distance) to the nearest side of the box and (iii) with ViewAngle -> All. This will produce an extremely distorted view, for a field of view close to 180 degrees, which can then be remapped into a fisheye view.

The image has to be rasterized at high pixels resolution, to account for the fact that the central part of the distorted image will appear much smaller than the outer parts, due to the large field of view. This, of course, results in a very inefficient procedure. An alternative would be to obtain different views, as Szabolcs suggested in his comments. But this would significantly complicate the procedure.

Following the above steps here is the proposed solution.

I take for illustration the amphitheatre proposed in my original question. 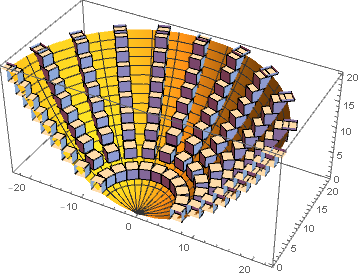 This produces the original very distorted (non fisheye) perspective, covering, in this case, a field of view of 169 degrees

This image can be remapped into an equidistant fisheye view, using ImageForwardTransformation as suggested by Alex, but with a proper fisheye transformation, as follow

This produces the desired equidistant fisheye view, where I show in black the region outside the field of view of the original Mathematica projection 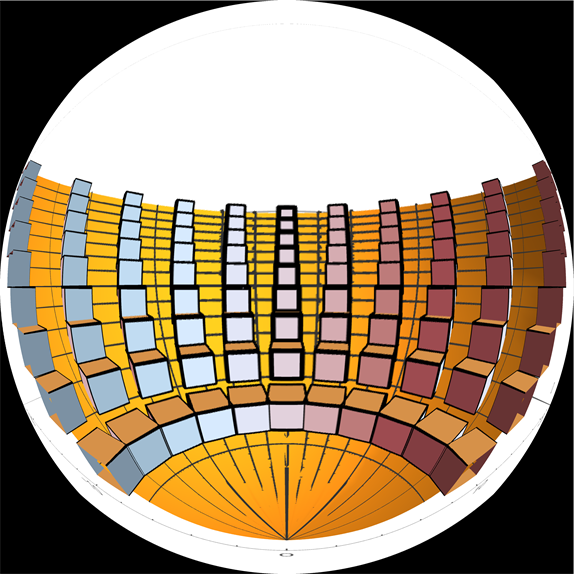 The author wants to see the same scene but in a different perspective, which is called a fisheye. This standard example is in the section ImageForwardTransformation[]. Reproduced with minor corrections

23
How to remap a fisheye image?