There was a question about a particular case of this, Quadratic differentials; seemingly it contained too little information, so let me try again. This will be also a second take on my previous question Getting rid of discontinuities in plots caused by square roots, logarithms, `Arg`, etc focussed on the particular case of square roots.

A quadratic differential is simply an expression of the form $f(z)dz^2$, where $f(z)$ is (for my purposes) some meromorphic function. For example, it can be a rational function, although I in fact need things like products of the Weierstrass function or some other elliptic functions.

A trajectory of such differential would be a standard solution of a differential equation if there would be $dz$ instead of $dz^2$: a (piecewise) smooth parametric curve $(x(t),y(t))$ that at every point $z$ it passes forms the same constant angle (counted always in the same, say counterclockwise direction) with the vector $(\operatorname{Re}(f(z)),\operatorname{Im}(f(z)))$. We could then obtain it by solving, for any given angle $\alpha$, the system \begin{align*} x'(t)&=\operatorname{Re}(e^{i\alpha}f(x+iy))\\ y'(t)&=\operatorname{Im}(e^{i\alpha}f(x+iy)) \end{align*} with, say, NDSolve, or visualize it using StreamPlot.

However the term $dz^2$ means that it must form constant angle with the vector $\pm\sqrt{f(z)}$ rather than $f(z)$. And since this vector now has two possible (opposite) directions, the condition now becomes that the curve forms either angle $\alpha$ or $\alpha+\pi$ with ReIm of $\sqrt{f(z)}$. This means we now have instead of a vector field, a field of tangent lines with unspecified direction.

There are easy examples showing that the resulting ambiguity cannot be avoided: with $f(z)=-z$ and $\alpha=\pi/2$, the stream plot for ReIm[I Sqrt[-(x+I y)]] is 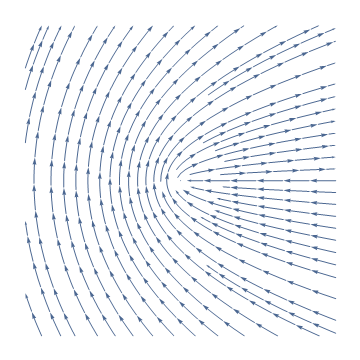 so that the positive horizontal half-axis gets conflicting directions. For more complicated $f(z)$ I failed to find any general consistent way to compute with Sqrt[f[z]].

Is there some alternative way? More specifically, given a smoothly varying family of lines $\ell_{x,y}$ passing through each point $(x,y)$, like this - 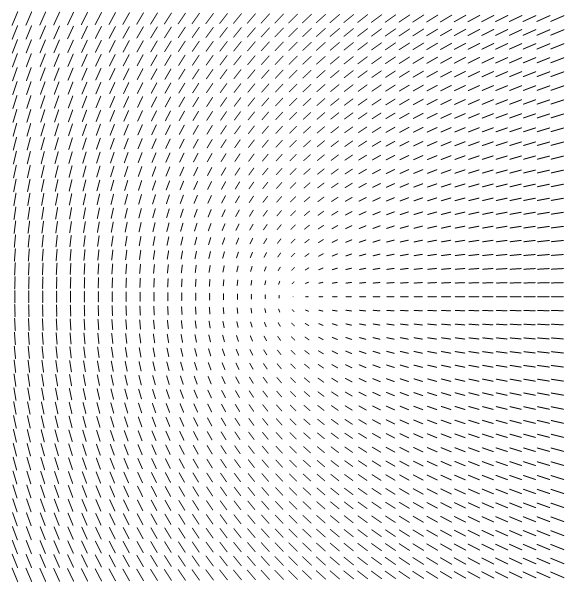 how to calculate and draw curves tangent to $\ell_{x,y}$ at each point $(x,y)$ they pass through?

Browse other questions tagged plotting differential-equations vector-calculus differentials or ask your own question.

1
How to plot special contour lines for a “Ridge System” of complex function?
3
Getting rid of discontinuities in plots caused by square roots, logarithms, `Arg`, etc

12
Creating randomly oriented planes
14
How do I plot a proper streamline plot, including spacings and line endings?
4
Finding the roots of a function with a parameter
8
Dipolar magnetic field lines inside a cylinder
3
why Mathematica gives zero as eigenvalue for $y''+\lambda y=0$ for these boundary conditions?
1
How would one go about plotting this parameterized curve using numerical resources (analitically it's too hard)?
2
Problem with numerical solution of a system of ODEs