DirectedEdge character doesn't appear when Save As HTML

The \[DirectedEdge] character doesn't appear when I save a notebook as HTML.

Here's the notebook, which saves itself to HTML: 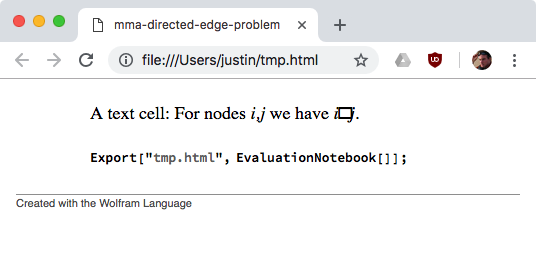 In the HTML, the \[DirectedEdge] is encoded as &#62421;, which unicodelookup.com doesn't recognize , but which Mathematica does:

I have also tried adding the option "CSS" -> "mma.css" to the Export command.

Browse other questions tagged export html or ask your own question.

10
How can I use “Save as (html)” and still render code as text?
4
Export notebook to HTML produces low resolution GIF
10
Is equation numbering in exported HTML considered deprecated for built in stylesheets?
40
Extract information from HTML using CSS selectors?
5
How to set ExportOptions for custom HTML exports
2
Export in slave notebook