How to start simulating physical problems?

I'm quite new to Mathematica, I have version 9. I need to use it to simulate some physical problems. I know the equations (like Maxwell's equations and Newton's laws and so on), but I have no real idea on how to get some nice visual simulating output.

Maybe let's start with some example:

If I have two stars rotating around each other, what is the best way in Mathematica to simulate and display the gravitational vector field of this problem (dynmically depending on the location of the stars)?

Or if I have some charges (not just points, but spheres, for example, ideally with some properties like polarity and permitivity) in an external electric field, how can I calculate and visualise the resulting field and the infleunce of movements and positions of the charges?

Where do I have to start here? Just by hacking the genereral equations that I have on paper into Mathematica I won't get some dynamic output.

I know the basics about Manipulate and on how to enter equations and on how to do some basic calculations (like DSolve). But I have no idea on how to get these things dynamical and visual so that I can just "move around" my stars and charges and see the resulting fields visually and in numbers.

Look at the simulation demonstrations and pick one which makes you think "That's the stuff I'd like to do!"

For instance predator-pray ecosystem there is a link to Download Author Code on each demonstration page, do that and open it in Mathematica and if it asks you to enable dynamics, do it. 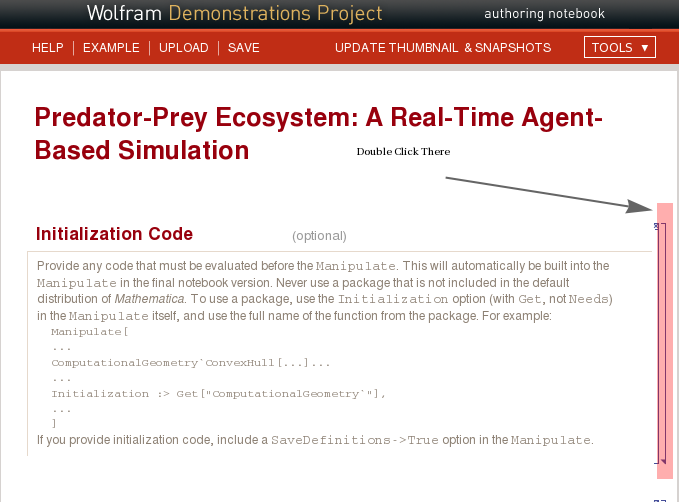 Now you can see all the code and you can scratch your head until you understand how it works :)

Not the answer you're looking for? Browse other questions tagged visualization physics simulation or ask your own question.

70
How can this confetti code be improved to include shadows and gravity?

23
How can we create Randolph diagrams in Mathematica?
7
Simulating a quick return mechanism
6
Numerically Simulating a Simple Differential Equation: RC Circuit
2
How to create a bar graph that evolves in time to monitor a simulation
0
Solve returns empty list on system of 62 linear equations with undeclared known variables