Visualizing a imported XYZ-file and graphic object at same time

I want visualize a imported xyz-file and a graphic object at same time.

But this shows only the xyz-file. Please, can someone help me?

This could be because the result of Show inherits graphics options from the first argument, this case the imported graphics. One of the important graphics options is PlotRange. Very likely this is explicitly set for the imported object, and the sphere might fall outside of these bounds (and thus may not visible).

If this is the case, explicitly set

Another possibility is that the sphere is so much smaller than the XYZ object that it is not visible. Also set Axes -> True in Show to get an idea about the size of the object. 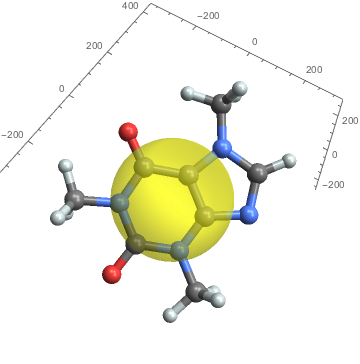 I set Axes -> True to get a sense of the scale of the imported object. based on this, I set the sphere radius to 200. A sphere of radius 1 would be invisibly tiny.

Not the answer you're looking for? Browse other questions tagged plotting graphics chemistry or ask your own question.

10
How can I access the internal function that plots a molecule from a formatted XYZ file?
7
How to show wireframes on imported Object / Mesh (.obj file)
0
Combining an imported PDB file with a set of Graphics3D objects
1
Plot Graphics in a loop and combine them in the end in one graphic done all over variables
3
How to bring 3d effect with transparent sphere?
1
Visualizing .xyz file in Mathematica
2
Substituting Atoms in .XYZ File
3
Label the atoms of a molecule imported from an XYZ file