Find region of given value for linear Interpolation function

Summary: How do I find the (possibly disconnected) region(s) where a linear interpolating function is between two specified values?

Goal: I have the "distance from coastline" data for a grid of latitude/longitude points. I want to find the total area where the distance from coastline rounds to, say, 492km (ie, is between 491.5km and 492.5km). Since I only have data for a finite number of points, I'm interpolating to find values for all points. I realize this interpolation is inaccurate, potentially very inaccurate. I'm OK with treating the Earth as a sphere even though it's actually an ellipsoid.

I realize I could generalize this question to ask "how do I find the [area of] the region where a given function is in a given range", but I think/hope the fact the function is both an interpolation and is linear might make the problem significantly easier.

Use ImplicitRegion to describe the region of interest and DiscretizeRegion to get a discrete numerical version thereof: 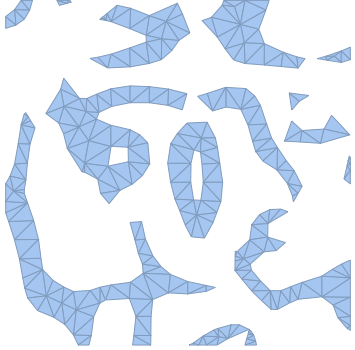 21
How to extract a contour line (or a region) from a ContourPlot?