Implement ListPlot with two (or more) lists, not necessarily of the exact same lengths

I'm computing an integral using two different quasirandom methods. (These correspond to the choice of parameters $\alpha_0= 0,\frac{1}{2}$ in the answer of Martin Roberts to How can one generate an open-ended sequence of low-discrepancy points in 3D? .) I have two corresponding lists that record the current estimates after $n, 2n, 3n,...$ iterations ($n=5,000,000$).

I can use ListPlot on the two lists, showing how they presumably converge to the value of the integral. Since I'm using different computational platforms, the current lengths of the lists are not necessarily exactly the same. I can, of course, use ListPlot by truncating the longer list to the length of the shorter one.

But, is there any sensible manner, in which I can jointly display the two lists in their current form, even if they are of different lengths, and thus convey better the (presently unknown) value to which convergence appears to be occurring (a matter of central concern, see https://quantumcomputing.stackexchange.com/questions/2740/estimate-determine-bures-separability-probabilities-making-use-of-corresponding), while still showing--in the same figure--the behavior of the two methodologies (a matter also of interest)?

As a note of further possible interest, in implementing the quasirandom sequences I'm using the remarkable code of Henrik Schumacher that greatly accelerates the InverseCDF command for normal distributions Can I use Compile to speed up InverseCDF? .

ListPlot can handle multiple lists with different lengths. For example: 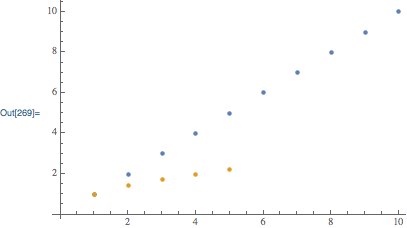 If you want the data "stretched" so that they cover the same range, you can use DataRange: 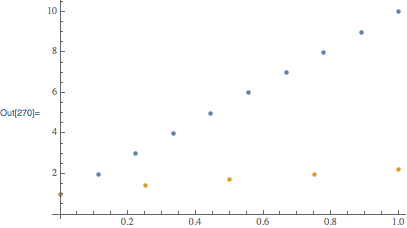 Note that the above stretching only happens when both lists are simple vectors of numbers.

Not the answer you're looking for? Browse other questions tagged plotting list-manipulation numerical-integration or ask your own question.

10
Can I use Compile to speed up InverseCDF?
3
How can one generate an open-ended sequence of low-discrepancy points in 3D?

10
Hovering mouse cursor over a plot to display a "corresponding" point in another plot
6
Changing the x-axis for ListLinePlot with more Lists
3
Union of two or more lists
0
ListPlot and Show n plots from two lists with large n
5
Plotting two lists of different lengths versus each other
3
How can one generate an open-ended sequence of low-discrepancy points in 3D?
1
NIntegrate fails with functions that have (necessarily) numeric lists as arguments
4
How to turn two lists of unequal lengths into coordinates?