I'm trying to use BoundaryDiscretizeRegion and/or ToBoundaryMesh to generate polygonal models for 3d printing, but I'm having trouble getting consistently high-quality results. Here's a simple example:

How can I get nice sharp corners in those places as well? Note that techniques specific to these particular cylindrical shapes may be of some interest, but I want something that will generalize to more complex shapes.

Some things I have tried:

EDIT: following added as a follow-up to @kh40tika suggestion to express result as a boolean combination of convex regions, and to discretize before doing the boolean operations. It's an interesting approach, but I'm having trouble applying it to the general case that I'm interested in.

My first step was to generalize Cylinder to an equivalent ImplicitRegion:

However that fails with this message:

So it appears that DiscretizeRegion may have some special knowledge of Cylinder? Is there a way to make your approach work using something more general than Cylinder?

Another problem I see is that in the general case I don't think it will be possible to use convex regions to generate the result. Here's an example of a more general case I'm interested in:

I don't think it's possible to represent this as a boolean combination of convex regions, is it?

Here's another example. This one follows the proposed rules (convex region, discretize before doing boolean operations), but the generated mesh is not what I'm looking for: 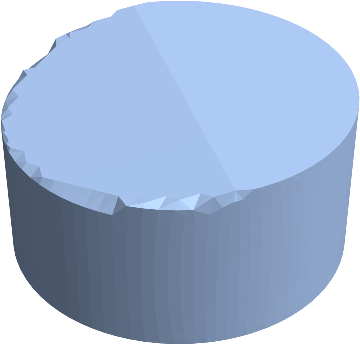 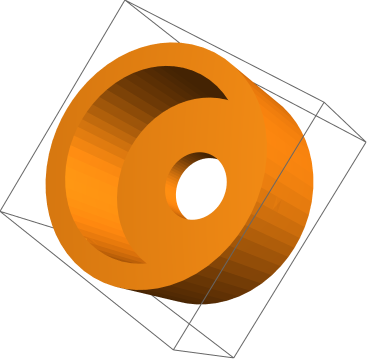 It appears Mathematica isn't currently capable of computing good surface meshes from implicit regions, so I worked some more on constructing surface meshes directly. Here's how the example above can be constructed (building some more general machinery along the way).

First we define a primitive for generating surface patches: 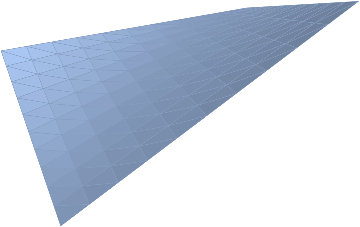 Now we build up some shapes as surface patches: 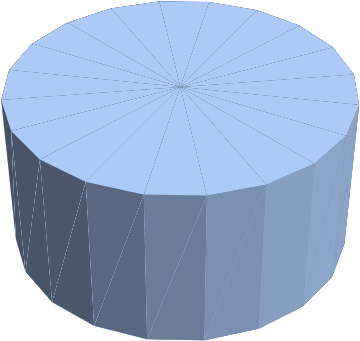 We can use these primitives to build up a more complex shape consisting of the union of 5 separate surfaces: 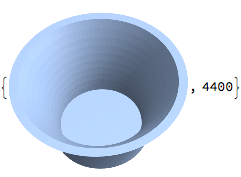 Note that in order for this union of surfaces to describe a proper solid boundary, e.g. for 3d printing, the edges of adjacent faces must coincide. For example, we have to use the same number of radial segments nθ for all the surfaces.

However, provided the surface is a proper closed surface, we can tell Mathematica to treat it as a surface that bounds a solid, and then we can do boolean region operations on the solids: 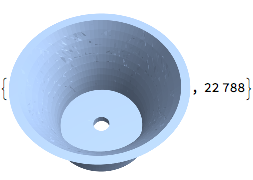 However the drawback of doing boolean operations over solids described using mesh boundaries is an explosion in the number of faces - computing this single region difference has turned the 4400 faces of the original shape into 22,788 faces. I suspect Mathematica is using BSP-based algorithms for this, and this explosion of faces seems to be a characteristic of systems that use BSP algorithms, like OpenSCAD and OpenJSCAD. It's better to build up the shapes from explicit surfaces if possible.

Not the answer you're looking for? Browse other questions tagged mesh 3d-printing or ask your own question.

16
Is it possible to re-mesh, downsample & upsample a DiscretizeRegion object?