Split up word pairs in string based on semantic textual analysis

I have several hundred sentence-strings with joined words. They were extracted from a text (and are in sequence).

Here is an example of one:

I would like to be able to split up joined "word pairs":

How would one approach implementing such an operation in mathematica? Ideas welcome!

I didn't check for speed, but one possibility is:

Since there were no ambiguous splits, you can just StringJoin the output:

"the quick brown fox jumped over the lazy dog "

If there were ambiguous splits, then perhaps you can use a function like TextStructure to choose the words that make the most grammatical sense.

This is not really a solution, but a quick demonstration of trying to solve this problem with neural networks.

My approach is to take small snippets of text (ending up as fixed-size input) from a corpus, mangling them by removing varying amount of spaces from some (or no!) locations, and to train the neural network to recognise if a space is missing at a specific offset of the sample string. (In my case, 16-letter inputs and looking on the offset 8 of the string.) This approach doesn't use recurrent neural networks or anything fancy, just a list of letters as input and a single output; here it's a "Real" for visualization purposes, but it could also be a "Boolean" with help of NetDecoder very easily.

The bulk of code is in the snippet mangling part. It may be a bit messy, but it does basically what I described above. I use Darwin's (On) the Origin of Species as my corpus (a toy approach!), since it's easily available on Mathematica, in a clean format, and it isn't too archaic or way too short for the purpose. The following creates the training set and trains a small network:

This takes about an hour on my CPUs. Now I can define a function to visualize weights the network gives to adding a space ahead of a specific letter on the input:

Now, my own example that demonstrates that the network is not all bull! 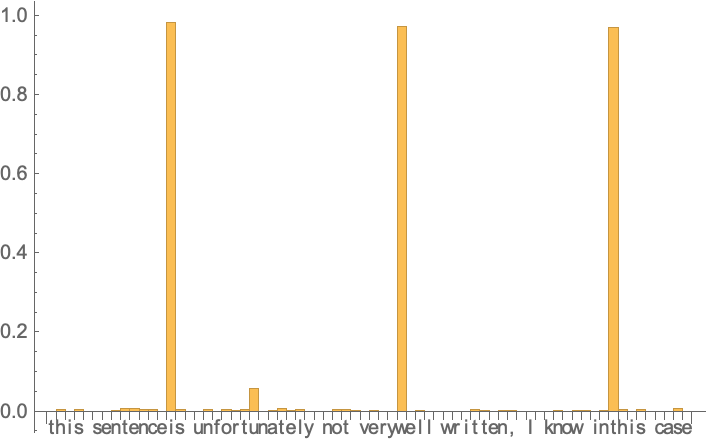 Well, that wasn't so bad for a dumb set of tensor algebra! Well, how does it perform with the string in the question? With a sufficiently long training run it does perform surprisingly well! 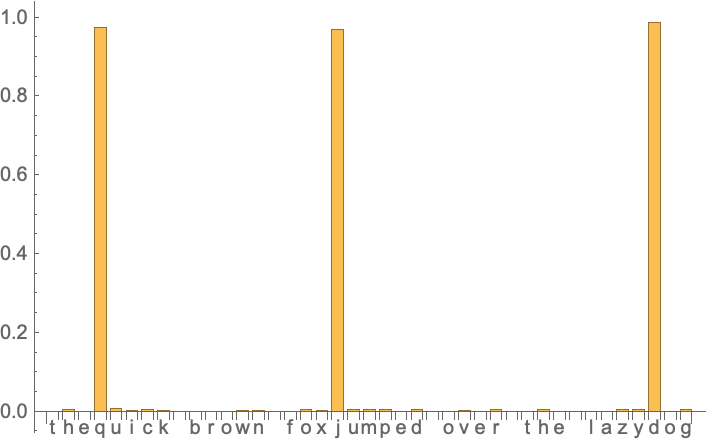 This is not a global matching algorithm like my earlier answer to a similar problem (https://mathematica.stackexchange.com/a/119905/3056). So, how does this implementation perform in comparison to that one? 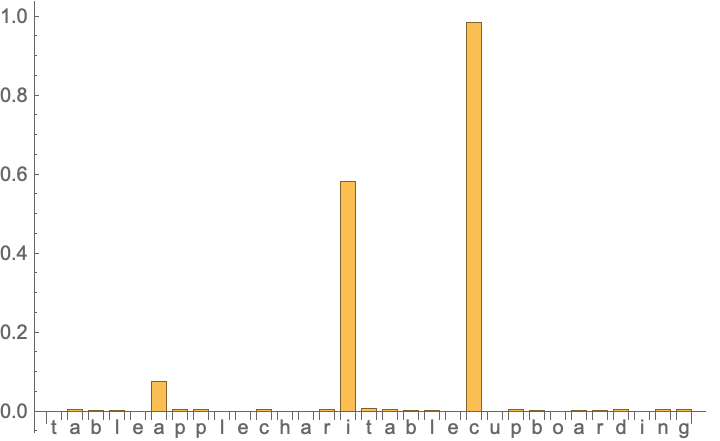 Well, surprisingly poorly. I guess the network more and more expects long words to just go on with longer and longer training times. Surely that's not a typical "some spaces omitted" input.

Not the answer you're looking for? Browse other questions tagged string-manipulation natural-language or ask your own question.

29
Splitting words into specific fragments
9
How to split text without spaces into list of words?