I'm getting some error messages that don't make sense. Apologies, as the code is somewhat complex. Basically what I'm trying to do is solve a system of differential equations, then fill a table with values for time and ρsol21[time], with a few other things going on. This is done via a Do loop.

I'm getting a few error messages that I don't quite understand. The first is

And I don't have any idea what that means. The second is

and I have no idea what this means either. Thanks for your time.

In principle, this is the working code. There are no mistakes, it is necessary only to define one parameter and avoid numerical divergence. All this is achieved if we put v=10^-9. Then we get a beautiful picture on the output 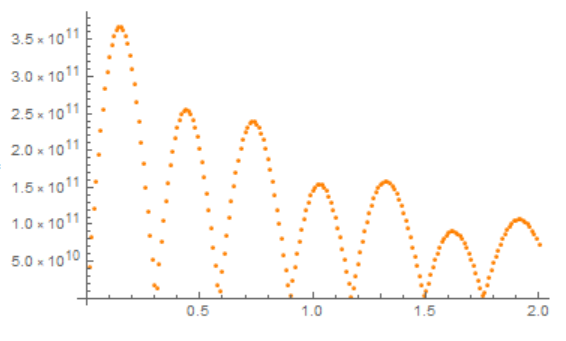 Not the answer you're looking for? Browse other questions tagged differential-equations table interpolation or ask your own question.

4
2d heat conduction equation: Boundary and initial conditions are inconsistent
6
Customizing display of partial differential equations
5
How should I deal with messages being produced by my Manipulate?
5
Overriding default ExtrapolationHandler
2
Suppress extrapolation in `TimeSeriesResample`
0
Plotting solution of ParametricNDSolve not possible for needed parameter range
0
NDSolve and interpolating function