Problem in sharpness of Heaviside Function

The Heaviside function is not sharp, Do not know why? 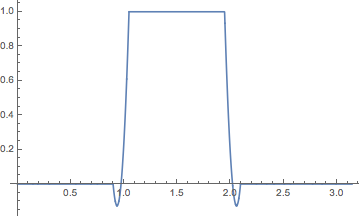 In NDSolve you can only approximate a discontinuity in the spatial domain by interpolation over a discrete set. In FEM, this is the only option and the order of interpolation is restricted to 1 or 2. In the method of lines, the time integration may have discontinuities (even if the spatial discretization is done by FEM).

My suggestion is that one can improve the approximation of HeavisideTheta by refining the mesh near x == 1, 2, t == 0. One issue is that HeavisideTheta[0.] is undefined, and therefore x == 1., 2. should be avoided. This is better dealt with by substituting a function for it that is defined everywhere, such as

The question is what value to assign HeavisideTheta[0]: 1, 0, 1/2, etc. The first two are asymmetrical and would result in the sorts of parabolas seen in the OP (if using order 2 interpolation). The value 1/2 would yield a symmetrical result if the grid points were symmetrically placed about the discontinuity. It would result in a straight, steep, but not vertical, line.

Here is one way to construct the symmetrical solution: 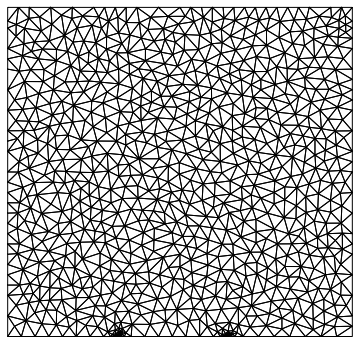 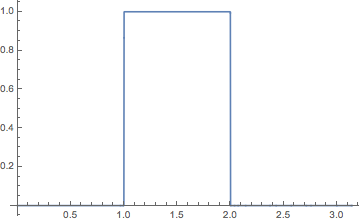 A close-up look reveals the lines are not vertical: 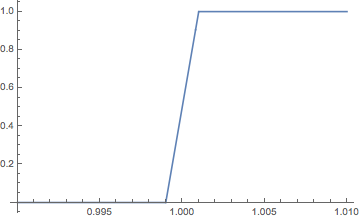 The quality of the solution to the whole PDE seems pretty poor, but that is a separate question.

This is not a answer, only some investigations that are worth to be shared.

Here is the code of the OP, exactly :

The aim of the following approach is to discover :

So far I know there are 3 possibilites :

3) Finite Element Method for all the independent variables, including what is generally considered as time (here t) and is treated with the Method of Lines.

extraction of the interpolatingFunction :

This subject is discuted here

So FEM was used.

Second Question : Was it a purely finite element method or was the temporal variable treated with the Method of Lines ?

The following code permits to have the answer. It comes from the documentation "finite element Programming":

What is the Mesh used by FEM ?

Since the problem is treated without special consideration for the variable t, the mesh is of dimension 2.
In fact we are mainly interested in the spacial grid at time t=0.

To analyse this, I propose to change the problem from kind 3) to kind 2). (that has the problem of the OP, I mean the bumps, too).
Here is the new code :

Now, one can retrieve the mesh and the coordinates :

Finally, a plot explains what happens in the OP's question :

The red points are the points of the mesh used by the FEM.
It's the interpolation in the function returned by NDSolve that is the origin of the bumps.

Not the answer you're looking for? Browse other questions tagged differential-equations numerical-integration finite-element-method discontinuity or ask your own question.

13
PDEs : automatic method choice : TensorProductGrid or FiniteElement?
3
Wave equation with mesh, "The ranges ... cannot be combined to a region"
4
How to improve quality of NeumannValue boundary conditions for stress calculations

4
Problem with adding vector to symbolic function (for NDSolve)
3
Problem with NDSolve and Sign
2
Problem with Internal Boundaries in NDSolve / FEM using the If Function
1
Diffusion equation
2
Solving an ODE with a sign/step function which depends on the time derivative
6
Ndsolve problem with Sign (friction)
2
Why does HeavisideTheta not have an implicit piecewise expansion?
1
How to solve a 3D permanent conjugate heat transfer problem?