Recently I noticed a peculiar behavior of MatrixForm that I failed to find a way to explain. Consider the following example:

My question is, after executing the code above, what is displayed in the notebook?

"…OK, I know how to explain this. There's a number of functions whose output in the notebook is not the same as the one in the kernel, for example, Format:

"and MatrixForm is just another of them. " Good point, unless MatrixForm doesn't behave as follows:

So the output of MatrixForm in the notebook seems to exist as a combination of multiple states, it

There may be more.

Further check shows this behavior has been existing at least since v3.

How to understand this behavior? A feature, or a long standing bug?

If it's a feature, is it possible to reproduce this behavior with self-made function? 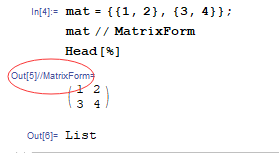 I've been aware of this behavior of MatrixForm long before I discovered the one mentioned in this question, but I don't find it unexpected at all, because as we can see, in this case the output displays as

rather than a single

which suggests that, the expression stored in Out[5] is exactly a List, rather than a MatrixForm expression. So when we use % (which is short for Out[]), there's no doubt we'll obtain a List.

This is essentially a duplicate of this question:

So what's going on with that TagBox, and how does ToExpression@ToBoxes@... produce a list? Well, normally the second argument of a TagBox, in the absence of more specific rules, is applied as the head of the expression generated from the first argument:

However, an exception is made for heads that are members of $OutputForms, where it is ignored:

This is "wrapper stripping" (the behavior of functions that "affect formatting, but not evaluation") is implemented. But it would be bad if wrapper stripping occured when you did a Convert To *Form. Fortunately, that operation doesn't use MakeExpresion/MakeBoxes, but rather a dedicated function, which knows not ignore those TagBoxes. Here is the call to convert from StandardForm to InputForm:

To be perfectly honest, the only reason I can explain this behavior is that I came across the source code for it while fixing a bug, and was able to reproduce the reason for it from the commit message. It is a bit of black magic, but given the relatively small number of questions about it for the last 24 years or so, it is good enough to get the job done.

Notice the second argument of underying TagBox[gridbox, Function[e, MatrixForm[e]]. It guides the interpretation from standard to input form (Ctrl+Shift+I). Since MatrixForm won't be forgotten, route back to boxes works too.

It is not documented but it seems to work like ToExpression[gridbox, StandardForm, Function[...]]. It won't work manually, ToExpression@ToBoxes@MatrixForm will return an array. Whether that is expected I don't know but I think this should be more consistent.

Here is another example (bug) showing the difference between Cell/ConvertTo items and composition of ToBoxes/Expression:

Not the answer you're looking for? Browse other questions tagged front-end formatting conversion or ask your own question.

18
Custom Mathematica Shortcut: Copy as $\LaTeX$
10
How to edit a hyperlink once created inside a notebook?
5
How to expand multiple cells at once?
9
Making flash cards with Mathematica
11
Programming scripts to create and modify stylesheets: problems with contexts
3
Maintain size of integral sign with limits