I need some tools to detect the fundamental frequency and pitch of a sound. I Googled for "pitch detect" and found some .nb files that do these tasks, but all the files are in Mathematica 3.0 format. I downloaded and installed the Signal Processing package, but this did not help, because these files use some obsolete functions like DiscreteWindow, ContinuousPiecewiseData, etc. I also tested the Signals and Systems toolbox but for the same reason there was no output in most cases.

Are there any newer replacements of these functions or some way to find their definitions in some old packages?

I downloaded and looked at some of these files you linked to above. To get one notebook autocorr.nb for example to run on V9, here are the steps I did:

However, ReadSoundfile did more than just read the sound data, it also did:

While Import["ExampleData/rule30.wav","Data"] does not do that. It leaves the data as is:

Now going on using the sound data as is.....

and it worked now

Ofcourse the plots do not look as the original ones, since the sound data was not scaled in this case as it was before.

To get this one notebook autocorr.nb to work on V9, the above changes are what is needed. You can examine the other notebooks the same way.

The code is hard to read, and they use UpperCase for variable names, which is bad. I am sure it can be optimized much more as it is full of explicit loops and procedural style which can be slow in Mathematica.

FYI, I have the old signal processing package (it does not run any more on newer versions) and the documentaions I kept here

As was mentioned above, V9 now contains many new signal processing functions.

These are in the old signal processing package, which I added a link to above. 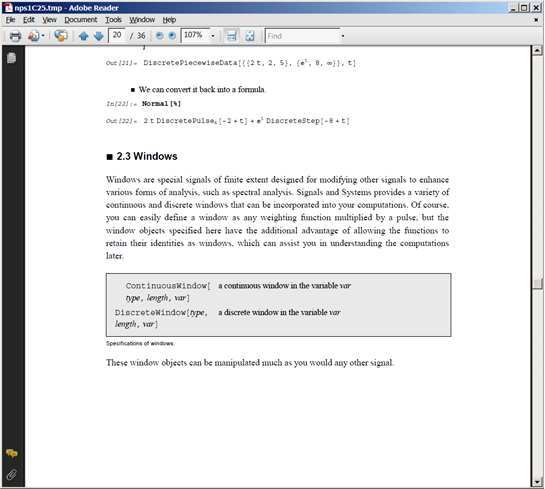