I have an issue with how different types of graphics are rendered alone versus in combination. If I render a simple circle like so:

I get a nicely rendered circle: 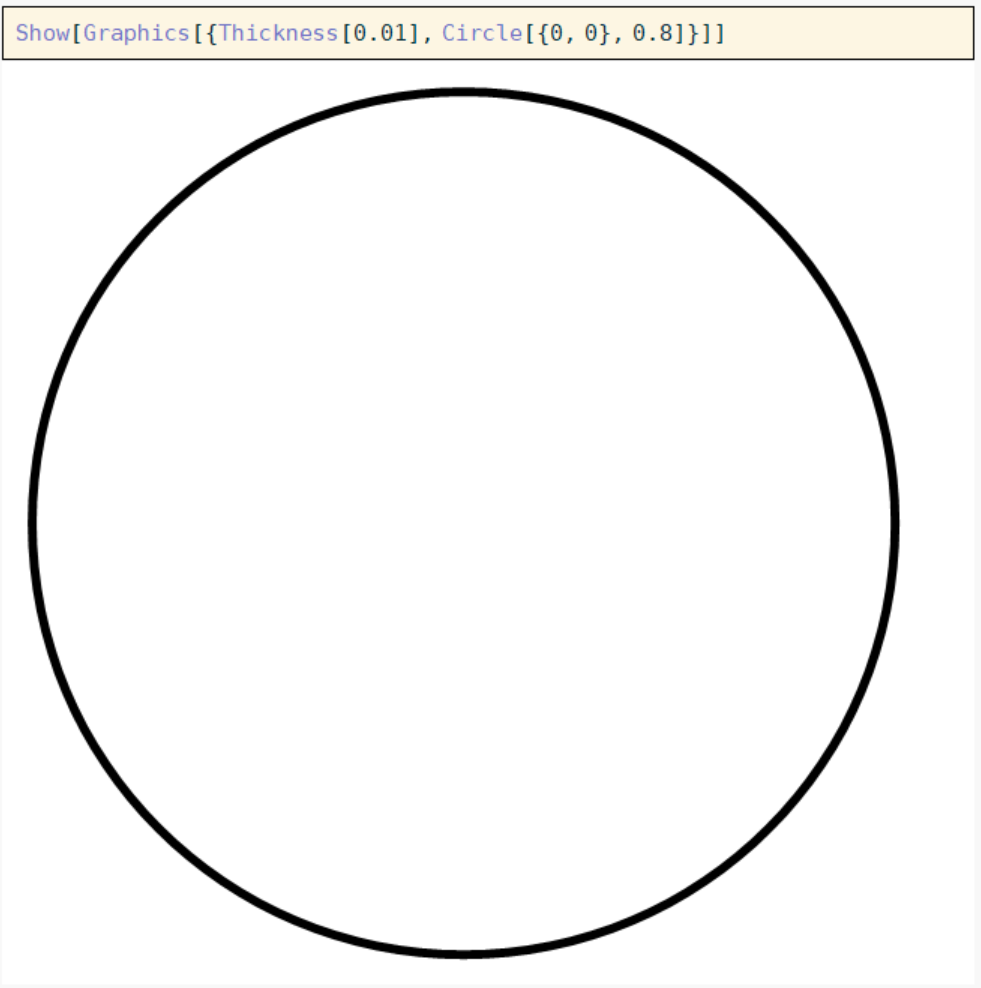 However, if I combine this with a slightly more fancy object like so: 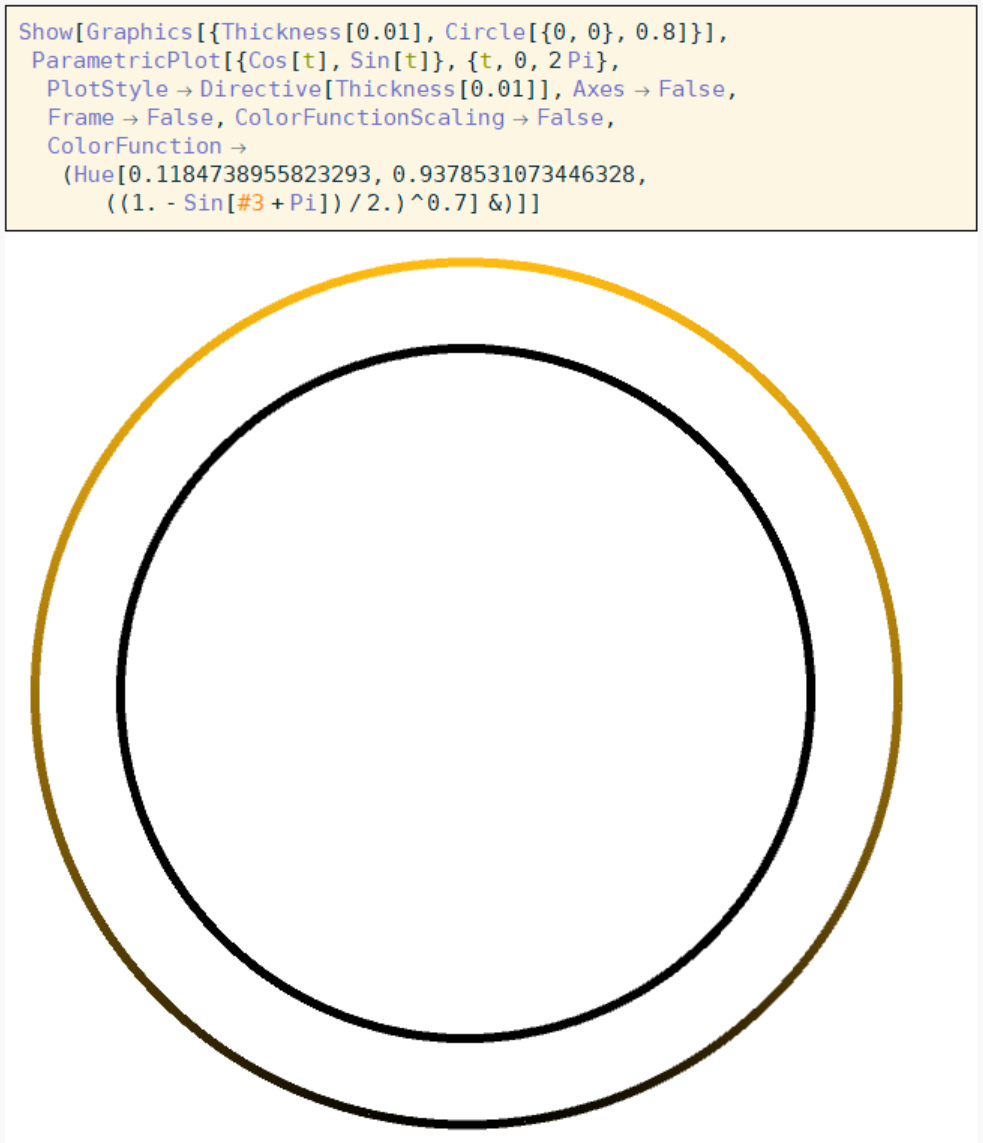 in other words, some fairly crudely rendered, pixelated objects. How can I fix this?

P.S.: I have found a reference to a similar issue here which is somewhat disheartening. If this issue still exists (the post I just referenced is almost ten years old) then we may be out of luck: Use of Colorfunction may ruin rendering quality of all graphics nearby.

P.P.S.: Oh, and to clarify, this is a Mathematica on Windows issue. Mathematica seems to (have to?) handle certain types of 2D graphics in a kludgy way, passing them to a 3D graphics subsystem that does not offer the kind of anti-aliasing that's done for 2D graphics. I don't know if this is a Windows issue or just an issue with the graphics framework that Wolfram chose to use. The issue does not exist on Linux or MacOS.

It's difficult to tell from your screenshots (which might have been scaled onto the website)...are you saying that there's no antialiasing, or different antialiasing? It is certainly true that the antialiasing, or lack thereof, in your graphic with the ParametricPlot is governed by the 3D drawing system. Many 2D drawing subsystems have various sorts of limitations which can be resolved by going to OpenGL/Direct3D. The most common limitations are the proper drawing of gradients (which is the issue here), or transparency. If a construct that requires specialized rendering exists, then the graphic must be drawn, in its entirety, in the 3D subsystem.

However, the 3D subsystem does, in fact, support antialiasing. It works a bit differently from the 2D version. One big limitation is that antialiasing is either on or off for the entire system; it can't be controlled for individual graphics or even primitives as it can be in the 2D drawing subsystems. This is a limitation of the technology we use, not a limitation we really wanted to impose.

Controlling the antialiasing can be done in the Preferences dialog, in the Appearance->Graphics subpanel. It's a slider which indicates "how much" antialiasing you want, where the details of what, exactly, this means may vary depending upon your graphics hardware. 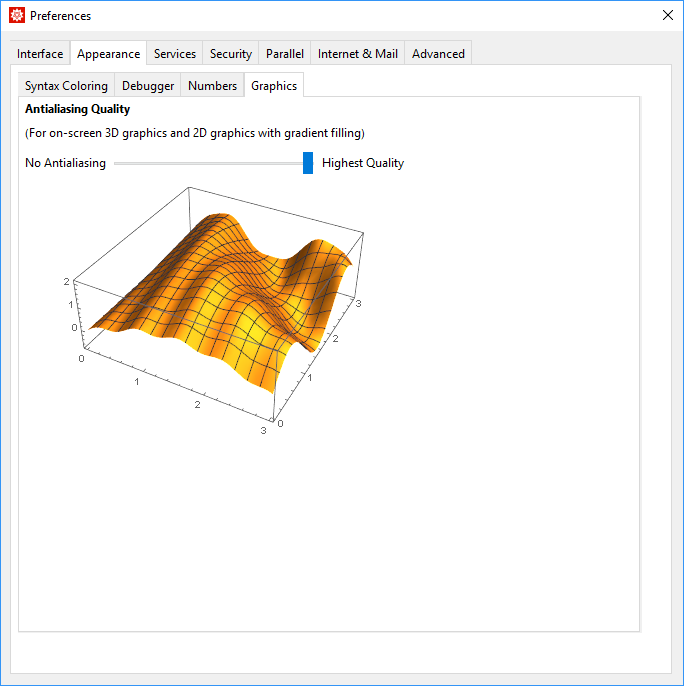 This is really just a nice interface for the RenderingOptions->{"HardwareAntialiasingQuality"} option, which is documented here, although the documentation does not clearly state that this option can only be effectively set at the global level.

Indeed, if I take your example, and I compare it with the option set to 0 and to 1, I see differences. You should, too, although depending upon your hardware, it may very well not be pixel-perfect to the rendering on my hardware. These are screenshots which I scaled up pieces of, rendered on my Windows machine with an NVIDIA GeForce GTX 960 and version 11.3.

If you're seeing no antialiasing at all, the most likely problem is that you have this slider set to turn antialiasing off. If your concern is that the antialiasing is different, you should still check to ensure that the slider is all the way to the right, but there may not be much that can be done at this time.

Older versions of Mathematica had the slider set to be off by default. I can't remember exactly when the switchover happened, but I'm fairly certain anything v11 and later will, by default, have 3D antialiasing on. But if you've ever manipulated this slider by hand, it will remember your setting rather than using the default setting.

Not the answer you're looking for? Browse other questions tagged graphics windows rendering or ask your own question.