How to read this dataset with .dat and .r64 files?

I stumbled upon the European Data Incubator project, and wanted to play around with some of their data. I'm trying to open this dataset, which contains a bunch of .dat and .r64 files. The project says:

This .DAT file is a text file that just specifies the file structure of the robot raw data included in the .R64 file described next.

This .R64 file is a Real64 file that contains the robot raw data according to the file structure defined by the .DAT file already described. A 15-attributes sample consisting of an hexadecimal register for each of following 15 attributes is included in the file every 4 ms:

In order to be able to read and properly interpret this .R64 file, special software such as Atom or Sublime has to be used, since the row data are stored in an inverted hexadecimal format.

I guess they mean just a regular hex editor (https://atom.io/packages/hex-editor). With hex editor the file looks as follows (definitely seems to be hex format as we see patterns in how the data appears): 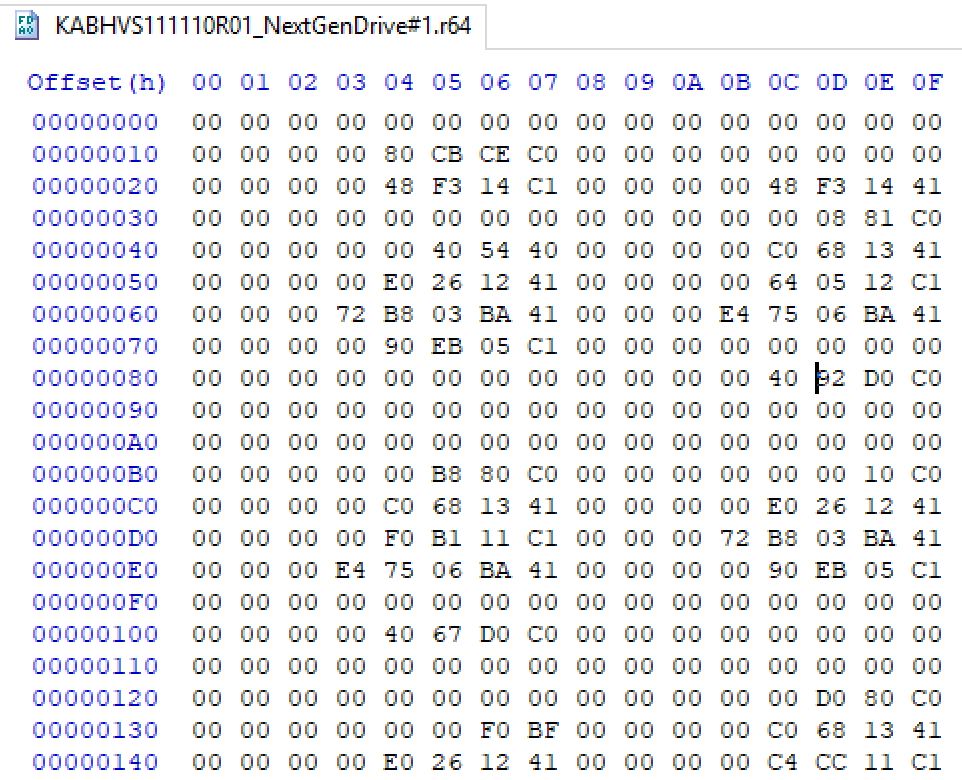 The .dat file looks as follows:

Some binary data of some sort

But past this point I'm stuck, which brings me to my question:

Any idea how I can make sense of the data inside the .r64 file?

The file appears to be nothing but 15 columns of 64 bit reals:

note column 15 is the difference of cols 13&14, consistent with the description (program position, real position, and difference). cols 10&11 could be kelvin temps (*1000). Some of the other columns don't make sense though.

note also there doesn't look to be a "header" as they are saying is described in the dat file.

Not the answer you're looking for? Browse other questions tagged import files-and-directories binary format or ask your own question.

14
Using ReadList and Skip to read a file with periodic alternation of useful and useless data
12
How to read 32-bit *IBM* (not IEEE) floating point values from a binary file?
0
Loading and processing five files at a time from a directory containing many, many files
4
How to read from /dev/random?
6
How do I directly read the Nth byte from a binary file?
1
How to read rows and headers separately into a dataset?
6
Renaming Files with Mathematica
2
Import files AppendTo and ToExpression
3
How can I read this file?