How to generate all Feynman diagrams with Mathematica?

I'm using the words "Feynman diagrams" for indexing purposes, but the question is in fact purely graph-theoretic.

I'm aware of the existence of some packages that generate such graphs, but I was looking for something that doesn't require any installation. Just to copy+paste code. This is a self-answered question, but any alternative answer is obviously welcome and appreciated.

Note: by graph I mean pseudograph, i.e., multiple edges and self-loops are allowed.

Note also: the $j$-th element in the list n is the cardinality of $j$ in the degree sequence of the graphs. I'm not sure if there is an accepted name for the list n, although it would be nice to know. This list is important in physics (because the graphs for a given n contribute to order $g_1^{n_1}g_2^{n_2}\cdots$ to the perturbative expansion in powers of the coupling constants $g_1,g_2,\dots$).

Here is a piece of code that is inspired by quantum field theory. The physics background can be found in this physics.SE post.

First, we define some auxiliary functions:

The function Δ[a,b] represents an edge that joins the vertices a,b. The function corr (for correlation function) generates all Wick pairings, so it contains all graphs we are after. Most of the graphs are isomorphic, so we need a function that tests for equality under permutations of vertices. This is precisely the purpose of reduce.

We now define the main function:

This function generates all graphs represented as lists. To plot these lists as actual graphs, we use 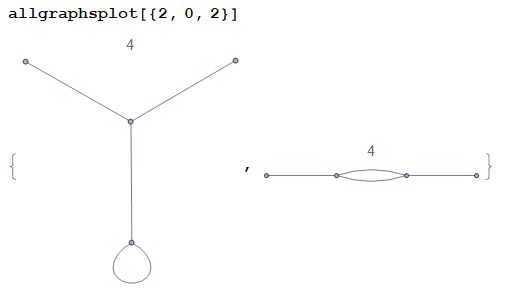 (The plot title is the symmetry factor of the corresponding graph.)

Not the answer you're looking for? Browse other questions tagged graphs-and-networks physics combinatorics or ask your own question.

4
How can I delete all similar Feynman diagrams in Mathematica?
4
Wick's theorem for Gaussian stochastic variables
3
Generating all connected graphs from a set of n-valent vertices?
2
Obtaining Feynman-like graphical representations from expressions with patterns
1
Problem with Wick Contraction

11
Random Geometric Graphs
8
(Efficiently) Generating graphs with vertex degree 3 for all vertices
4
find cycle in directed graph
2
Finding nonequivalent 3-cycles and edges of a given graph
12
How to delete unnecessary resistances in a resistance network
23
Generating and rendering extremely large graphs
4
How can I delete all similar Feynman diagrams in Mathematica?
3
Connecting 2 graphs according to NearestNeighbor and degree distribution