These integrals evaluate in version 11.2 on windows but when I tried them under version 11.3 they returned unevaluated.,

What to do to make them evaluate under 11.3?

I haven't check these integrals myself, but we did fix some bugs related to branch cuts where indeed incorrect answers were produced. My guess is that some of these indeed had subtle issues, and others were probably collateral damage where potentially problematic branch cut issues were avoided.

While the issue clearly is to be resolved eventually by WRI, a solution to the problem of obtaining symbolic solutions to indefinite integrals may be to use Rubi which is short for Rule-based Mathematics - Symbolic Integration Rules by Albert D. Rich. It is written in the Wolfram Language and can be easily used via a Notebook in 11.3.0.

After downloading the zip-file and extracting it into a directory of choice, there is a notebook called Rubi4.14.nb. Setting the parameter $LoadShowSteps = False; in the notebook to supress showing intermediate steps (for now), we can do:

In the same vein one can tackle the other integrals: Using the Rubi-notebook and its Int command each of Nasser's integrals can be integrated in Mathematica 11.3.0. 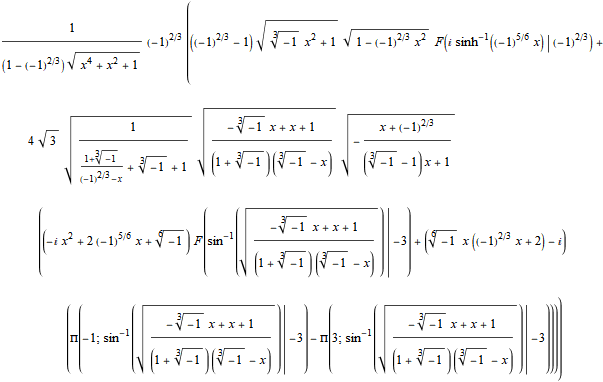 The third integral will be an even more striking comparison: The output given by Mathematica 11.2.0 is rather too large to print (FullSimplify will take "forever") while the result obtained using Rubi fits neatly into a single line (appearing almost immediately):

So let's wait for the Mathematicians about the validity of the results. But if the results obtained fast and neat using Rubi's rules of integration are valid, then we may see some truth in this classical verdict:

"Only the best is good enough." - Voltaire

Too long for a comment: It seems that V11.2 was slightly wrong about the first integral. I think an antiderivative ought to be differentiable, hence continuous, at least over the connected components of the domain of a continuous function. It seems the real part of the integral is a correct real integral, but strictly speaking Re[ad] is not differentiable. Better branch checking might make the V11.2 answer be rejected in V11.3, but that's just a guess. 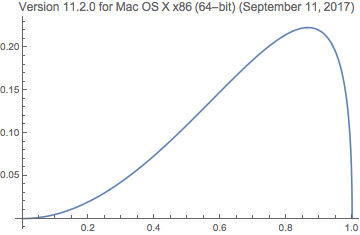 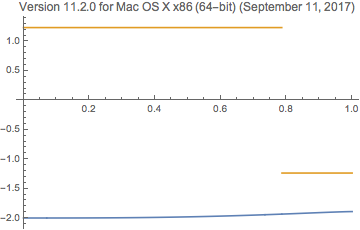 The discontinuity is at x == Sqrt[1/GoldenRatio]

There is a branch cut on the real axis for x > 1, but I do not see how this justifies the discontinuity in the integral far away from x == 1 ("far away" = separated by open disks): 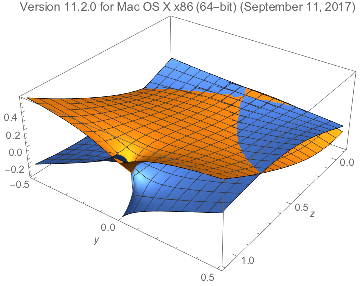 It seems your voice has been heard! All of the integrals you list are now again evaluated, in MMA 12.0.0 (for Mac). Note, however, that the new outputs may not be different from those originally generated by 11.2.0. I don't have the latter running to do a comprehensive check, but 12.0.0 does give results identical to 11.2.0 for the examples shown in the posts by gwr and Michael E2.

Rubi can evaluate all of these except for integral no. 12:

The MMA results for the remaining 22 integrals are, on average, substantially (160–fold, by leaf count) larger than those from Rubi. Evaluating all 22 integrals together in a single cell on a fresh kernel takes 19 times longer in MMA than Rubi. 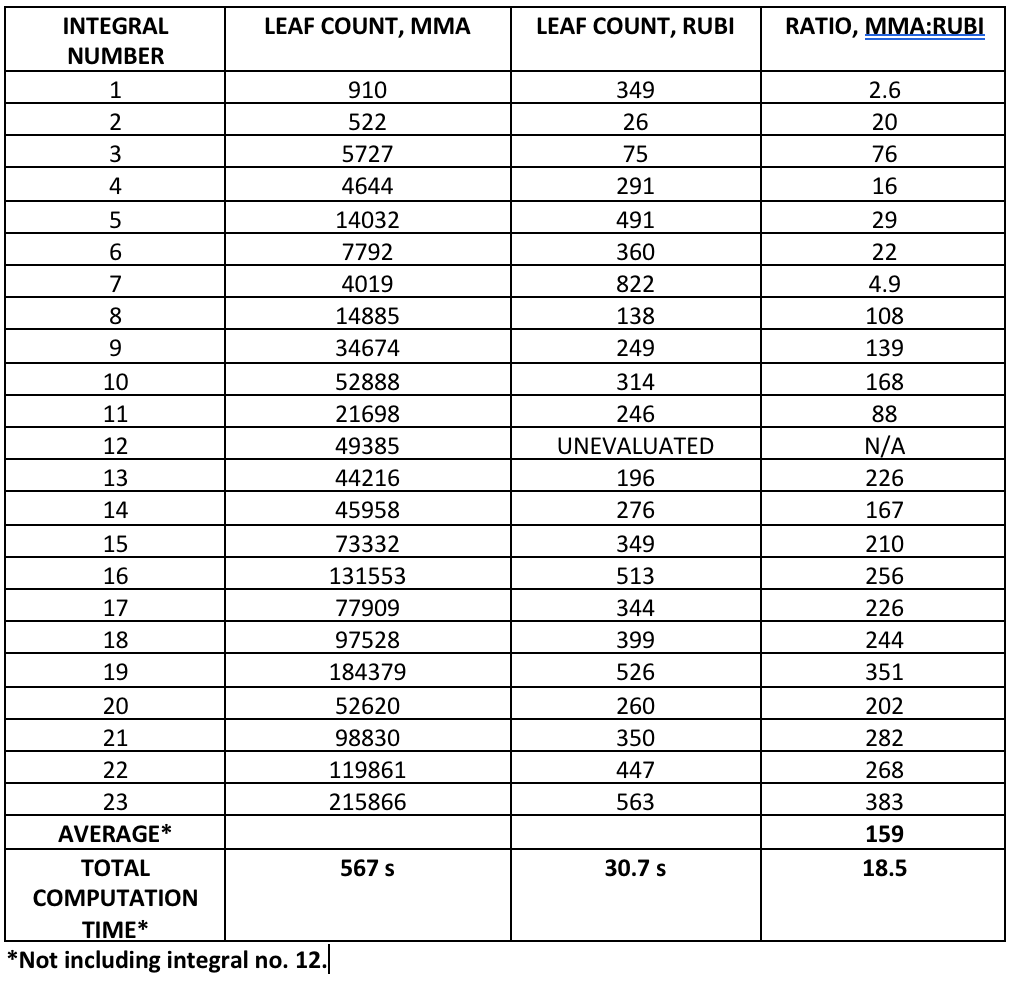 One other notable distinction between MMA and Rubi (referring to Michael E2's post) is that, when the integrand has non-integrable singularities, Rubi typically (though not always) returns antiderivatives whose discontinuities "match" (i.e., occur at the same points in the domain) those of the integrand, while MMA (especially for more complicated antiderivatives) often does not. Furthermore, I've found that, for intervals over which an integrand is real-valued, Rubi's integrals are much more likely to be real-valued than MMA's (unless the integral is relatively simple, in which case both will be real-valued). For instance, here is the integrand from Michael E2's example (integrand no. 1 from Nasser's list): 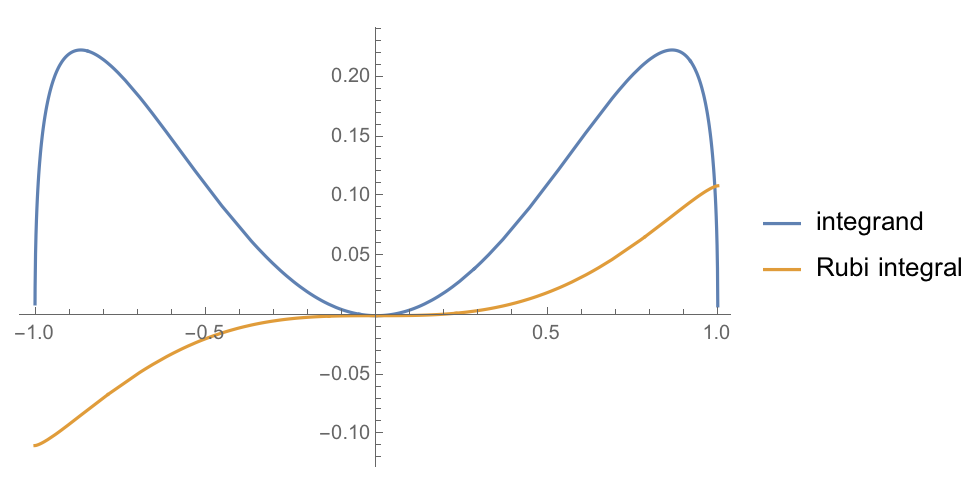 Here's a related example, taken from a WRI blog, of an integrand that is continuous on the reals, but has simple poles elsewhere in the complex plane (https://blog.wolfram.com/2008/01/19/mathematica-and-the-fundamental-theorem-of-calculus/):

Note the blog is from 2008, and doesn't mention Rubi, which may not have yet been publicly released; it just happens that the "alternative" antiderivative to which the author compares the MMA result is the one that Rubi generates. Let's call the integrand $\mathcal{h}(z)$, and its MMA and Rubi antiderivatives $\mathcal{H}_1(z)$ and $\mathcal{H}_2(z)$, respectively.

However, this notion (that $\mathcal{H}_1(z)$ and $\mathcal{H}_2(z)$ are equivalent merely because they both have discontinuities) doesn't make sense to me, since it ignores the importance of where the discontinuities occur. Here there is a choice between an antiderivative that is continous along the reals and one that is not, and I think the former is typically a more convenient choice. Yet, even when an antiderivative that is continous on the reals exists (which is generally the case if the integrand is continous on the reals*), Mathematica often instead provides one that is not.

*With the possible exceptions, as Daniel Lichblau points out, of "complex-analytic antiderivatives, or a different notion of integral e.g as might exist in the world of generalized functions".

Not the answer you're looking for? Browse other questions tagged calculus-and-analysis bugs symbolic version-11.3 or ask your own question.

29
many indefinite integrals do not evaluate in 10.1, looking for the cause
14
Problem with integrating DiracDelta
12
Potential bug of function Reduce
6
IsomorphicGraphQ issues?
9
What does DSolve`DsolveLaplaceTransformDump` mean in solution of DSolve?
13
Bug in NearestNeighborGraph
5
Why this PDE causes internal 1/0 division?
17
Why the Kernel crashes on these integrals in V12?
6
These indefinite integrals evaluate in 12.0 but not in 12.1 - what can be done?
20
These PDE's no longer evaluate in version 12.2 as they did under 12.1. What can be done to make them evaluate under 12.2?