There are already few topic related to Hash[_String]:

How does Hash calculate hash for strings?

And I don't see an explanation in documentation: 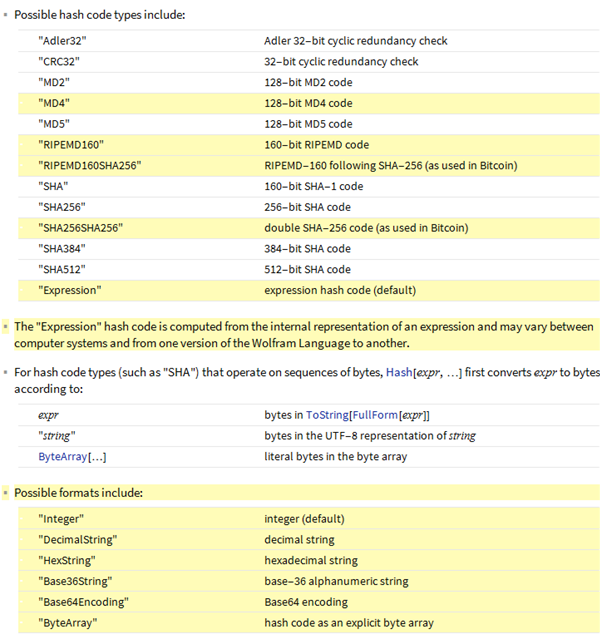 What is the complete list of changes? How to make old code compatible with those changes?

There is already discussion about String and ByteArray in the linked previous Q & A, so I'll comment a bit about general expressions.

This only concerns the named hash algorithms like "MD5" or "SHA" etc.

The single argument form Hash[expr], which is equivalent to Hash[expr, "Expression"] is completely separate and based on the internal representation of expr. It has not been changed for 11.3.

Using @Kuba's example of a very simple expression, in 11.3 we have the following new hash value

The previous hash value can still be obtained using

Why the change? The previous scheme for converting expressions (to strings) for hashing had a number of severe problems.

For example, it did not take into account the contexts of symbols so it could happen that the same expression would hash to a different value because of a different $ContextPath, it had issues with evaluation leaks etc.

These have now been addressed, but the fixes mean the hash values would inevitably change. Developer`LegacyHash is provided for people who in some way depend on the old hash values.

The wording in the documentation isn't fully accurate, because ToString[FullForm[expr]] is not used literally.

What is actually true is that the input given to the hashing algorithm is based on the bytes of ToString[Unevaluated[FullForm[expr]]], where all symbols in expr are qualified with their full contexts.

Furthermore, a constant 32-byte sequence prefix is added for (non-String and non-ByteArray) expressions to avoid collisions -- this ensures that the number 2 and the string "2" do not end up having the same hash value. This is because ToString[Unevaluated[FullForm[2]]] is the same as the string "2" but 2 and "2" are different expressions.

Below is a mock-up example (not the actual implementation) that could be used to replicate the 11.3 hash value even on earlier versions. It uses the byteHash utility defined in my previous answer.

While the documentation ideally should give some idea of what serialization is used for general expressions, I would not hold the expectation that it must go into any deep level of detail or provide sufficient information to actually write an alternative implementation. Besides, the serialization could conceivably change some day again.

I think the moral is, if people want full control, they should themselves create a sequence of bytes to give as input to the hashing method in whatever way they see as appropriate. Then, what a named algorithm like "MD5" or "SHA" must return is fully determined, and a result different from that would certainly be a bug.

I guess the reason for that has nothing to do with the "MD2" or "MD5" sum, which hasn't changed. The reason is that the input you are feeding has changed. To create a hash from an expression, Mathematica needs to convert the expression into a serialized form that can be hashed.

Before we consider, what changed between version 11.2 and 11.3, let us first take a look at what happens when hashing expressions. As I said, when hashing an expression, it needs to be converted into bytes that are then hashed. Kuba pointed out the following information from the documentation

In version 11.3, at least the str and bytes hash is the same on my machine but only the str hash matches between the versions. This gives the clue, that we need to look at how bytes are constructed from an expression.

I'll leave the digging as an exercise for the interested reader. Between 11.2 and 11.3, a great deal of the hash implementation has changed. One of those changes is in

This function is responsible for turning an expression into a string. While in version 11.2 it only has one parameter: the expression, in version 11.3 it takes a second boolean argument LegacyQ.

It contains a prefix string that is followed, indeed, by the full-form of {}. This prefix is the reason, why simply hashing the FullForm gives a different result. In version 11.2, you can therefore use

to get a string that hashes to the same value as the expression itself. In 11.3, things are more complicated since a string is further mangled by a

step that changes the prefix. But this is not important right now, because the main difference is, that in 11.3 the transformation from expression to string changed. The standard Hash call does not use LegacyQ, but we can call the inner function and show the difference:

So 11.3 includes the context in the FullForm. This is the reason for the difference in the hashes when using expressions.

In version 11.3 you can achieve the same behavior by creating the string form in legacy mode and converting it correctly to a byte-array

Not the answer you're looking for? Browse other questions tagged documentation compatibility hashing or ask your own question.

9
FullForm with context for each symbol?
8
How does Hash calculate hash for strings?
1
Incorrect calculating Hash SHA256

13
Why does Hash return different values in Version 7?
6
Why does the hash of a file differ from the hash of its content?
6
Hash reliability for uniqueness?
5
What has changed in PolyhedronData in V11
2
Cell @ CellGroupData[… in Cells family
8
How does Hash calculate hash for strings?
1
Incorrect calculating Hash SHA256
3
Using “?” to get function details has changed?
8
How to define your own hash type?