How to stop text with sub/superscript and fraction in FrameLabel from being Italic?

The objective is to use a Roman (i.e., non-italic) font in FrameLabel. 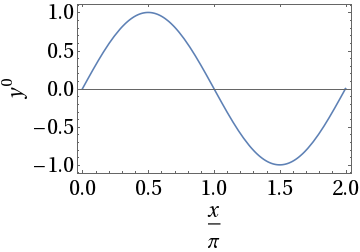 As you can see the FrameLabels are in italics. I can prevent italics for $y^0$ by using Superscript["y", "0"], but I could not find any way to handle the fraction. 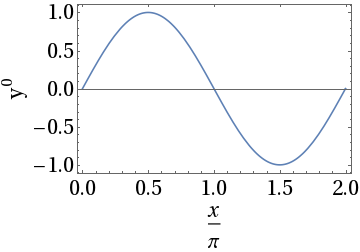 I have not tried using MaTeX yet. I would like to see first if this problem can be fixed with a small tweak. I am using MMA11.1 in Linux.

SingleLetterItalics is controlling this behaviour. For example:

If you want to stick with using DisplayForm and boxes then try this:

The default format for Graphics is TraditionalForm:

So, three simple approaches to avoid italics are:

Now, for the question about why your example had a mixture of italic and plain variables. Mathematica typesetting converts expressions into boxes in order to show them in two-dimensional form. For example:

Notice the presence of the box form FractionBox and that the variable x and constant π have been converted to their symbol names "x" and "π". One can use DisplayForm to print boxes inside an expression in explicit two-dimensional form (I prefer RawBoxes to DisplayForm, because DisplayForm encourages the mixing of expressions and boxes, and I think they should never be mixed). Your first label:

is thus equivalent to the typeset form of x/π, and so naturally in TraditionalForm the x is displayed in italics. Your second label:

is just an expression, and so the "y" is not displayed in italics. If you had used:

instead, then since SuperscriptBox is a box form, "y" would be the box representation of the variable y and it would have been displayed in italics.

Here then are a few examples of a FrameLabel option that would not typeset anything in italics:

You could apply Style to each axis label as well: 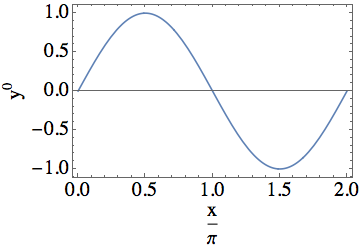 Not the answer you're looking for? Browse other questions tagged labeling fonts or ask your own question.

7
How do I prevent fonts sizes and line weights from scaling in exported graphics?
4
A Symbol with Subscript and Superscript as an Axis Label
1
Problem with "FrameLabel" when specifying Superscript, Italics, and Times (font)
1
How can I use Callout with assigned value and text?
2
How I can get glyphs from a fraktur font and use them as identifiers?
5
Plotting with sub and superscripts on the PlotLabels
1
How to adjust the size of a `FrameLabel` that consists of a picture or an object from MaTeX?
8
How to properly use FrameLabel with the new PlotLayout feature?