I have enjoyed working with R inside Mathematica. But it would be nice If I could have a special R cell. For example, instead of typing

I would change the cell style to the special R code one and simply type in the code as I would do in a terminal window. Like so:

Is there some way to create such a FrontEnd cell?

In the future I would like Mathematica to have code highlighting and autocompletion for such cells. This would make Mathematica the best environment for working with R.

There is an undocumented symbol

When you type it and press Shift+Enter, you get a syntax-highlighted R code cell based on my real-time syntax highlighter, which is connected to REvaluate and highlights the code as you type. Note that the cell where you type RLink`Private`rcell will be gone, replaced with the new R code cell.

If it is too much typing, you can make an alias like so:

and then evaluate rc instead.

Here is a sample screenshot: 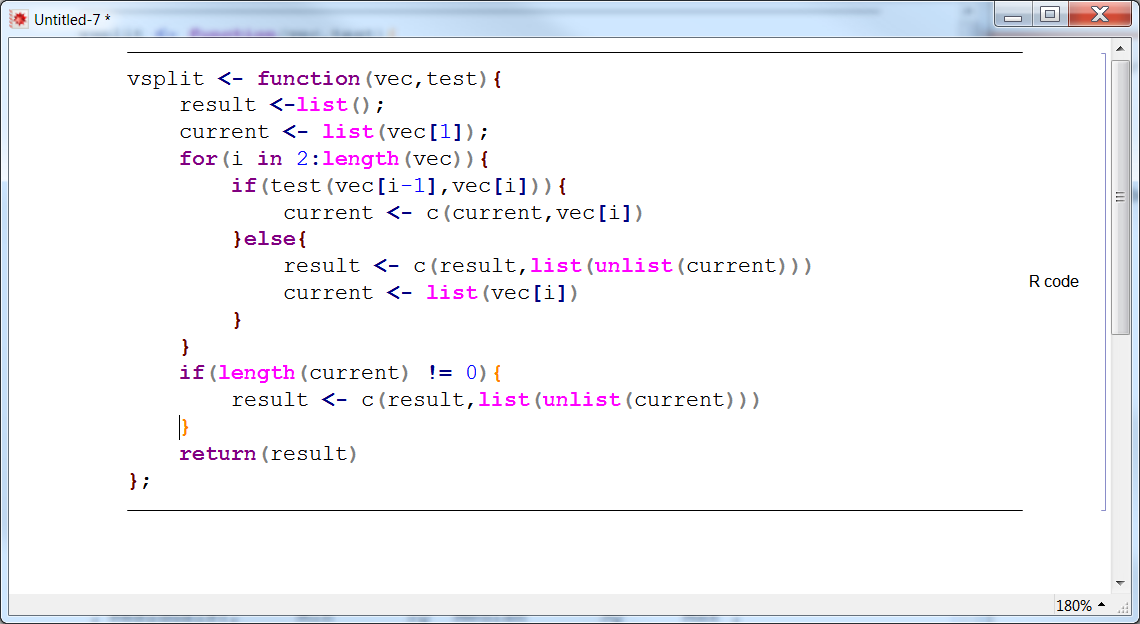 As noted in my answer about the highlighter, it does perform bracket and parentheses matching / highlighting as well. To make it more responsive, I disables re-parsing on all keys except left/right arrows and space bar, so you will have to press one of those to re-render. Normally they are pressed most frequently when working with code, so this should not be very noticable. Also, the cursor may disappear at times, but again, pressing these keys should make it re-appear. The same remark goes to the visibility of block selection.

Note that, as present, rcell does not understand the multi-line code string without curly braces. One way to fix this is to execute this code:

Apart from problems on specific platforms, the highlighter may have a few glitches. If you find some, I would appreciate if you report them to me.

The following is a style for an R cell, inspired by this answer. You can add this to your stylesheet (change the styles to your liking):

You can now create a new R cell by pressing Cmd8, but you'll have to manually remove the MenuCommandKey setting from the "Code" style before it'll work. Alternately, you can simply press Cmd0 and choose R from the list.

You then use it just like any other input/code cell. Paste your R code into the cell and hit ShiftReturn and it'll evaluate it (assuming RLink has already been called, etc.)

Not the answer you're looking for? Browse other questions tagged front-end rlink or ask your own question.

34
Customizing syntax highlighting for private cell styles
11
Programmatically quitting the FrontEnd or running without one?
28
Saving my code before cell evaluations: Insurance against front end hanging
7
Make all new cells have a specific style as a function of the Mathematica installation
6
Maintaining stylesheet information in Cell[]
6
Automatic shading of all InitializationCell->True cells in older versions
5
Dynamic docked toolbar that appears only in the Working screen environment
0
Is it possible to make a notebook behave like text editor such as Sublime Text with regard to code formatting?
5
Why does the Frontend slow down in long sessions?
4
Can Mathematica open a second window to an already open Notebook?