I learned today, while doing my homework, that Mathematica can understand group theory. Combing through the documentation though just gave the examples of permutation groups. I would like to know how to define an arbitrary group, some set and a binary operation on that set. Ideally, this would allow the use of the other built-in functions such as those for finding the order of a group or element, etc.

We assume you've already read about Cayley's theorem which others also mentioned in their comments. Let's pick up a group, for example Klein 4-group, $K_4$, and to be consistent with each other let's pick up the table of multiplication that is represented in its wikipedia page (https://en.wikipedia.org/wiki/Klein_four-group). I also prefer to replace the wikipedia's notation in this way "e->1, a->2, b->3, c->4". So I'm calling elements of my group by 1, 2, 3 and 4 which 1 is the identity element. Anyway, I inject my group to $S_4$ by sending each element of $K_4$ like $g$ to the permutation of $K_4$ under multiplication by $g$. So for example the new representation of 2 will be $\begin{pmatrix}1 & 2 & 3 & 4\\ 2 & 1 & 4 & 3\end{pmatrix}$. Since the first row of the representation of permutations is always the same $\begin{pmatrix}1 & 2 & 3 & 4\end{pmatrix}$, let's save space and only show a permutation by its second row and keeping in mind that we are not confusing it by the cyclic permutations! This way, each element of the group in fact is represented by its row in the multiplication table of the group. Now you can ask Mathematica to consider the subgroup of the symmetric group (remember this injection/map is an isomorphism and that's why its image is a subgroup of the target group). To do this use the command PermutationGroup[] and give the list of lists which the inner lists are rows of the multiplication table. Now you can apply the Mathematica commands of group theory on this object. For example in below you see the two commands you already mentioned yourself; GroupOrder and GroupElements.

In the following image you can see the result of these lines when you run them in Mathematica.

However be careful. Not every Mathematica's command will be happy of this object. For example if you apply CayleyGraph command on this group object, you will get the following problem. 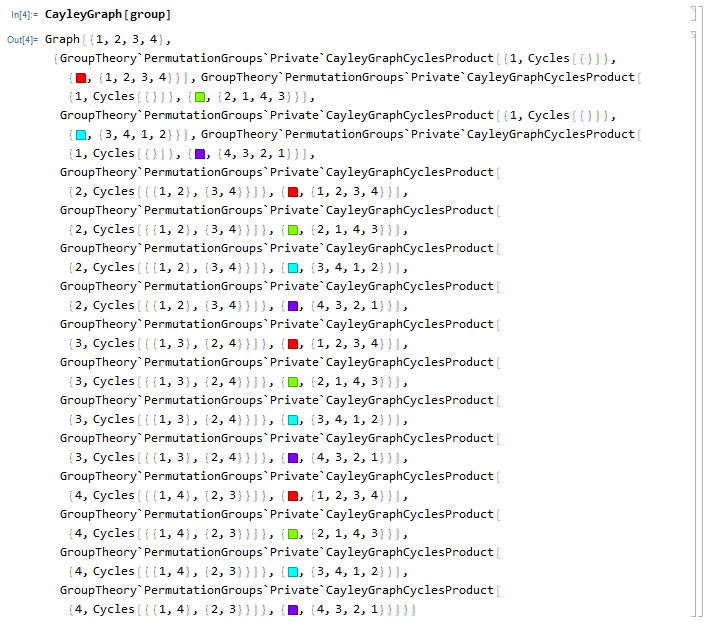 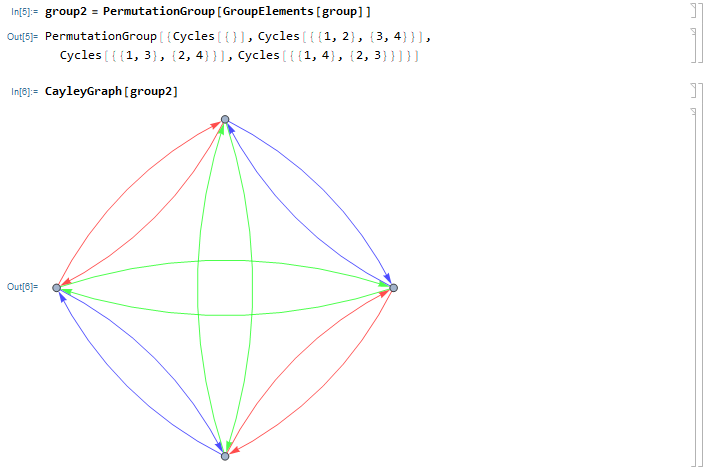 Not the answer you're looking for? Browse other questions tagged group-theory or ask your own question.

10
How to transform abstract finite group to permutation group?