I have a weighted, undirected network with five nodes, whose adjacency matrix is given by

I've created a weighted graph using A as follows:

The result was {4, 4, 4, 4, 4}, which is incorrect given my positive, integer-valued weights, and instead corresponds to the degree centrality of a complete graph on five vertices.

If you are working with weighted graphs, I highly recommend my package IGraph/M, which makes this much easier in many situations. (Apologies to everyone else for bringing this up yet again.)

Annoyed about having to replace zeros with infinities? Use IGWeightedAdjacencyGraph. It can use any matrix element as the notation for a missing connection. The default is 0 (or 0.).

Let's also thicken those edges at the same time. 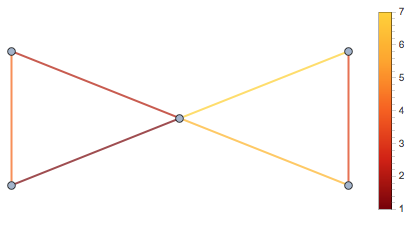 I assume that when you mentioned DegreeCentrality, you wanted the strength of each vertex, i.e. the sum of edge weights for their incident edges. IGraph/M has that:

In both these functions (as well as in the built-in ClosenessCentrality), the edge weights are used directly in the shortest path calculations as the length of an edge. They are not transformed (e.g. inverted) in any way.

If you want to construct a new graph with inverted edge weights, a simple way is

If you want to remove weights, you can use IGUnweighted. To test if a graph is edge-weighted, use IGEdgeWeightedQ (and note that the builtin WeightedGraphQ would return True for a non-edge weighted vertex weighted graph).

There are several other functions in IGraph/M which are useful with weighted graphs, or provide some advantage over the built-in equivalent when weights are present. E.g. IGReverseGraph correctly preserves edge weights while ReverseGraph does not.

I also accept suggestions for new features/functions, especially as they relate to weighted graphs, which I use myself extensively.