Bug introduced in 10.0 and persisting through 12.0

I am attempting to implement this: How can I wrap text around a circle?

But I need Unicode support. Unfortunately, in my case, this gives a broken output (some Unicode characters missing replaced by rectangles)

Can this be fixed somehow? 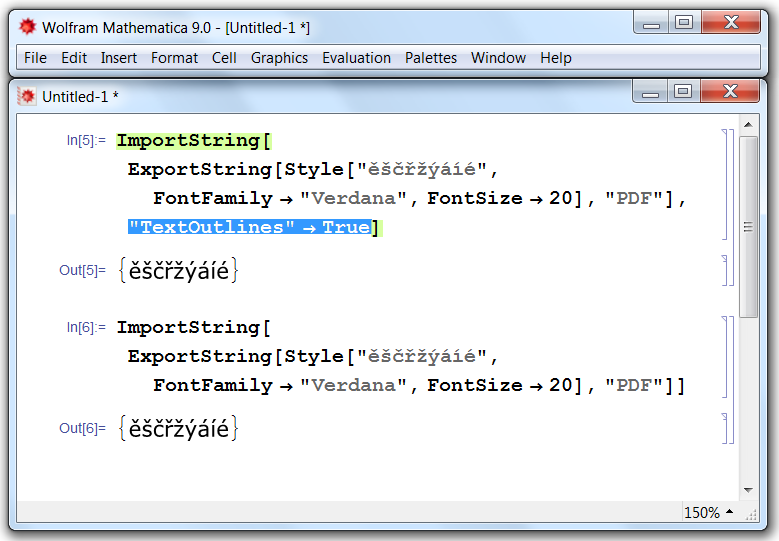 Here is how it is rendered by Acrobat 11 (I intentionally selected a part of text to show that it is selectable text):

The text can be copied and pasted from Acrobat into Notepad correctly, hence there are no problems with encoding in the exported PDF.

This file (created by version 11.2.0) can't be correctly imported by pre-10 Import: the latter is unable to decode correctly any character at all:

So the overall conclusion is that both Import and Export starting from version 10 received Unicode support, but in the case of Import there are bugs with some particular symbols.

Unfortunately I can't suggest any workaround for this problem except downgrading to a pre-10 version of Mathematica. Even new in version 10 BoundaryDiscretizeGraphics function is affected by this bug:

Apart of this, the options "TextMode" -> "Outlines" and "TextOutlines" -> True are ignored by Export, so we can't revert to the old behavior of Export.

Please report it to the tech support.

According to discussion here, one can use GhostScript for outlining fonts in the exported PDF file. It can be automatized with gsExport function from this answer by Jens. Then Import will correctly import outlines from obtained PDF file (like it was in versions 8 and 9).

Not the answer you're looking for? Browse other questions tagged bugs import pdf-format character-encoding unicode or ask your own question.

33
How can I wrap text around a circle?
6
How to preserve clipping when exporting a framed histogram with font embedding?
11
Exporting equations from Mathematica to Corel with full Latex quality
0
ExportString "PDF" crashes FrontEnd session