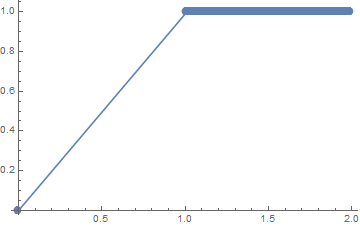 Visually, geometry suggests the Mean ought to be roughly 3/4. However,

This is the same as Mean[ts["Values"]]. In other words, Mean is computed using the underlying values, assuming they're equally spaced... even if they're not.

In contrast, Mean@TimeSeriesResample@ts returns $149/200\approx 3/4$. By resampling with equal spacing, which roughly corresponds to applying Mean to the underlying continuous interpolating function, we get the expected result.

As a result, my initial hypothesis of how functions are applied to TimeSeries was f_[t_TimeSeries]:=f_[t["Values"]].

Unlike Mean, it appears Differences of a TimeSeries somehow takes into account the spacing of the datapoints.

Personally, my intuition is that applying a function to a TimeSeries ought to roughly correspond to applying that function to the underlying InterpolatingFunction of the data. However, that's debatable, and Mean clearly wasn't implemented that way.

This has caused some unexpected results while I was working with unequally-spaced TimeSeries.

The Mean[] you're looking for is