I have a Mathematica application that consists of two sub-packages, corresponding to the contexts foo` (foo.m) and foo`b` (b.m). Some of the definitions in foo.m rely on functions in b.m. Therefore b.m must be loaded before foo.m in some way (there are multiple ways to achieve this).

If the loading order is reversed, i.e. load foo` first, then foo`b`, then everything is fine. But I cannot do that because of the dependency structure.

And here's the file contents:

If I load foo` (which in turn loads foo`b` as well, through init.m), TheOtherName is not offered for completion. 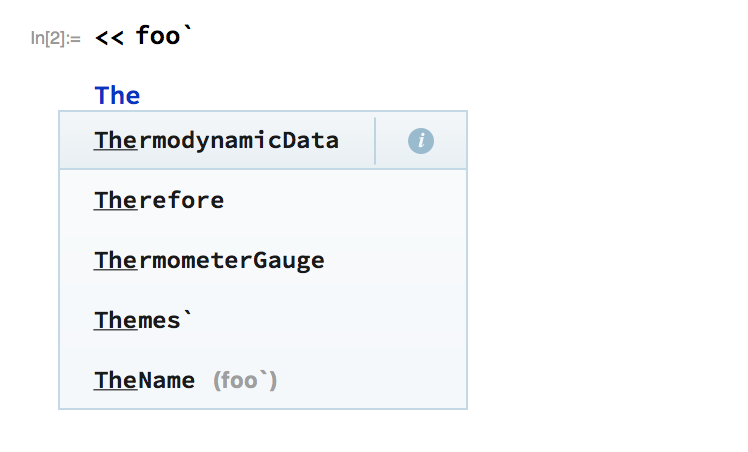 I need a solution where one sub-package can be dependent on the other, but auto-completion works for both.

If I change init.m to

(i.e. I exchange the order of the two Get commands), then auto-completion works fine.

I do not want to do this because in my real use case, foo` depends on foo`b`, therefore foo.m would need to load b.m in some way. A second Get["foo`b`"] after this would cause double-loading of b.m, which is ugly and slow. These are large packages and the slowdown is actually noticeable on a Raspberry Pi.

to prevent double-loading, then auto-completion is broken again.

I am hoping to find out what precisely in Get["foo`b`"] re-enables auto-completion and re-create that thing in isolation without actually re-evaluating all definitions from b.m.

So I can provide some clarification and a workaround

First off, this only triggers on the EndPackage:

For example, this still allows ggg to autocomplete:

But the moment you call EndPackage[] ggg stops autocompleting.

Further investigation shows that even simply messing with the $ContextPath is enough to do it.

Next, this does not seem to have to do with the standard way the FE handles autocompletions (as I know it at least).

I say this because the following doesn't prevent it from auto-completing (working from a Quit kernel):

And even more to the point, this isn't enough to preserve the autocompletion:

why this happens is something I haven't been able to figure out. This behavior is a lot like the behavior involved in developerFunctions.m. There doesn't seem to be anything in NeedCurrentFrontEndSymbolsPacket to explain it.

This will recover the auto-completion:

So after you load your packages, you can use that to get your autocompletions back.

Not the answer you're looking for? Browse other questions tagged packages autocomplete or ask your own question.

26
How do I add the infobutton in autocomplete that links to the documentation page for package functions?

19
How to unload automatically loaded packages?
69
Is it possible to improve Mathematica's auto-completion feature?
11
Predictive code completion and custom functions in contexts
5
How do you set up private contexts shared between sub-packages?